Almost from the moment that last year's Farm to Fork Dinner at Wilson Farm was over, I've been anticipating this summer and another dinner out in the middle of this suburban farm. The minute I heard about this year's dinner, I jumped at the chance to get tickets. For those who don't know, Wilson Farm consists of 33 acres of farm land just outside Boston in Lexington, plus another 500 acres in Litchfield NH, and it has been run by the Wilson family for almost 130 years. The farm stand in Lexington is huge, and includes produce, a bakery, take-out meals, plus indoor and outdoor plants. It's also home to what I think of as the best arugula in the world (I'm not kidding, it's the best I've ever had).

When I told my parents about how wonderful last summer's dinner was, they of course wanted to join me this year. A whole bunch of my friends were supposed to join us to, but they all canceled at the last minute for various reasons (boo! hiss!). That means, though, that I'll be pestering them about the August dinner that the farm has planned.

The crowd - 75 in total - gathered next to the farm stand, and we were led down a set of stairs and out into the field. The location of the dinner this year was a plot that had been filled with beets only a few hours before (and would, of course, be sown with something else the very next day). The tables were decked out with gorgeous centerpieces filled not only with flowers, but also vegetables and herbs. Wine, water, and a fabulously floral soda were passed around, and we all dug into fresh bread. 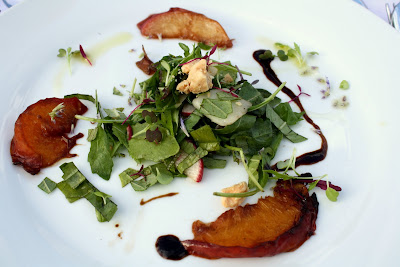 The first of many salads came out, eliciting excited ooh's from everyone. This plated salad, a mix of arugula, radishes, Thai basil, anise hyssop, microgreens, and roasted peaches, would be at home in any fancy restaurant in Boston. With all of those ingredients, plus garnishes of flowers from the anise, marcona almonds, shaved pecorino, and syrup-thick balsamic vinegar, you'd think there would be too much going on, but everything was very well balanced. I probably could have eaten a whole bowl of this and gone home happy, but there was so much more to come. 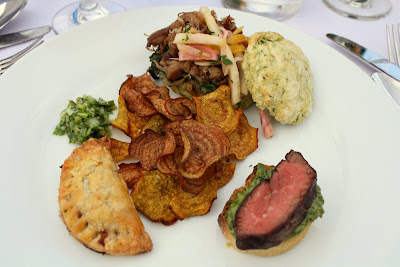 Next came a trio of appetizers. The plate was piled up with all kinds of good things, like a pulled pork sandwich (on an arugula pesto biscuit), grilled hanger steak crostini with a spinach gorgonzola pesto, and empanadas de cabra. Chef Todd Heberlein told everyone to take a bite of the empanada before informing us that "cabra" means goat. (I had already spoiled this to my whole table, having watched the conversation between Todd and local meat purveyor Concord Prime on Twitter all week.) The big winner on this plate (not surprisingly) was the beet chips in the center. People kept saying "I didn't know you could make chips out of beets," but come on, they're root vegetables. I've never met a fried root vegetable I didn't like (and I'm still not a fan of beets - sorry, Todd!).

The next salad course came out (and only a meal on a farm could pull off multiple salad courses and have everyone wanting more), and it featured a basic green salad, tossed with a wonderfully light vinaigrette, and a huge plate of pickled vegetables. I, of course, enjoyed the beans and the cucumber (still not the beets!), but I absolutely loved the radishes, fennel, and ginger. I was surprised about how mild the radishes became after pickling. I'm ready to go out and buy tons of radishes and bulb after bulb of fennel so I can eat these all the time.

By main course time, we were all getting full, and there seemed to be a little vegetable fatigue going on around me (while I was anxiously awaiting the next big bowl of vegetables to come my way). The main dish of the course was local sea bass with nasturtium butter. Not being a huge fan of bass, I didn't love this dish, although the compound butter was lovely (hell, you could put flowers in anything and I'd like it, but butter? What's not to love?!). The vegetarian main dish was fresh cajun-spiced pasta with kale, chard, and Jacob's cattle beans (garnished with rosemary frico). I always think of kale and beans (a perfect combo, by the way) to be more of a winter dish, so it seemed out of place while sitting out on a beautiful summer's night. (That's not to say it wasn't delicious...) The two veggie dishes - green and wax beans with fennel, arugula, and parsley, and zucchini and summer squash with caramelized onions, olives, and zucchini blossoms - were very tasty, and they got me excited about eating boatloads of zucchini in the next few months (my first zucchini, coincidentally, came in this weekend). 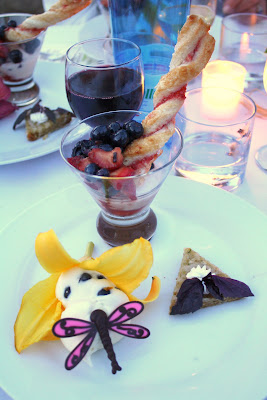 Just as the sun went down, it was time for our final course - dessert! Because the bakery is a different department than the kitchen, I'm sure they feel that they have to show off what they can do as well, so we were treated to not one, not two, but three desserts. First off, there were blueberries and strawberries in balsamic vinegar atop ginger ice cream (with a strawberry jam pastry straw to boot). A little sliver of zucchini bread (more like a super-moist cake) sat nearby, topped with butter cream frosting and purple basil. Last but not least was the "floral surprise," a lily filled with marscapone and blueberries (and topped with a chocolate dragonfly). Doesn't it look gorgeous?

We rolled our way back out of the farm (I had warned my mother that it would be dark, so she led the way with her little pocketbook-sized flashlight). I was full but not overly so, probably because the meal wasn't terribly rich but plenty satisfying.

If you're interested in attending a Farm to Fork dinner at Wilson Farm, they are planning on hosting another in August. The exact date will be announced in early August - if it's anything like this time, they'll announce it on Twitter and it'll sell out quickly. Don't hesitate to put your name on the wait list if it fills up, though, since there were quite a few people who had taken spots from people who had canceled.
Posted by Pam at 5:19 PM

This looks like another fabulous evening! I'll have to keep my eye open for the August dinner!

That zucchini cake sounds divine!! I had such a good time at their event last winter, I could only imagine how wonderful this was.

Funny timing! I went to Rochester, NY, over the weekend to see my nephew play with the Empire Statesmen Drum & Bugle Corps and passed Wilson Farms on the way in. I thought "oh wow, I didn't know that was a chain." Then I thought "w-a-i-t a minute...!" I realized it was a convenience store, but I could have sworn it was a farm in MA. Thanks for confirming that for me right on cue!!

The dinner sounds great, but I'm in awe of that lily idea for dessert. Beautiful! Hope the August dinner is just as great.