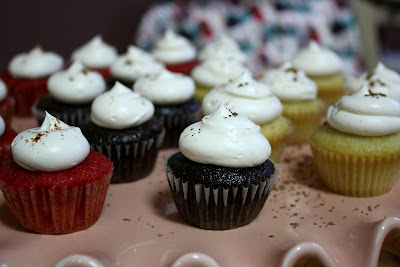 Almost a year ago, my blogging friend Rachel of Fork It Over, Boston!, in the middle of a quest for the best cupcakes in Boston, declared that she had found a winner (of course, that wasn't going to stop her from continuing on her quest). Her praise for The Chocolate Tarte in Somerville seemed too good to be true. Because, frankly, I've had a lot of bad cupcakes and some good cupcakes, but none that left me talking about them for days.

So when Linda of The Chocolate Tarte invited a few bloggers to her shop to try her wares, I was ready to see if her cupcakes could possibly live up to the hype. I walked into the store and immediately had delicious chocolates thrust into my hands. Pistachio white chocolate? Yes! Raspberry Anise? Of course! Tequila? Don't mind if I do! We were all so distracted by these little gems that I almost forgot there were cupcakes to be had.

Linda had lined up a whole bunch of vanilla, chocolate, and red velvet mini cupcakes, and I jumped for the chocolate. I couldn't have been more surprised to find the moistest mini cupcake I'd ever tasted. Anyone who bakes knows that it's tough to keep miniature versions of pastries as tasty as the full-sized thing, so this tiny little piece of cake was a revelation. The frosting on top was light and creamy, like whipped cream with a bit of Fluff thrown in for good measure.

There was also a whole red velvet cake that we went at like wolves, and it was as perfect as the cupcakes were. The Chocolate Tarte does beautiful cakes to order, and I know where I'm going the next time I need a tasty birthday treat. 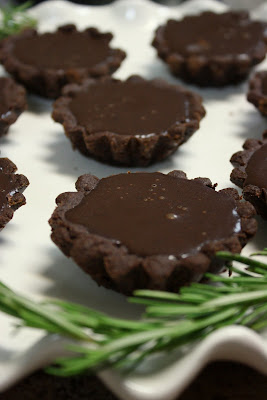 Of course, there's more to The Chocolate Tarte than just cupcakes. As the name implies, tarts (chocolate and not so chocolate) are a specialty. We tried mini chocolate rosemary tarts (above) which were just fantastic. The rosemary was very subtle, and the chocolate filling was creamy and smooth. If I had to pick a favorite dessert of the night, it would probably be these tarts. There were also fudgy brownies that were so dense, you only needed a few bites to be sated.

So while I didn't believe Rachel when she said these cupcakes were THAT good, I do now. Don't believe me either? Head out to The Chocolate Tarte in Somerville yourself and tell me I'm wrong.

Full Disclosure note: The pastries were provided for free by The Chocolate Tarte. But I wouldn't write about them if I didn't like them.

These sound so good! I doubt I can get from Australia to Somerville but a girl can dream!