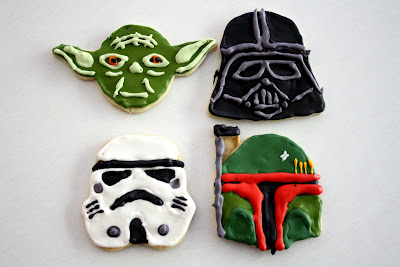 Does my family know me or what? My birthday was last month, and about 93% of the presents I received were cooking related (and this isn't the first time this has happened). One of my brothers, who taught me all the geeky things I needed to know as a child, got me these awesome Star Wars cookie cutters from Williams-Sonoma. I had been lusting after these on a recent W-S visit (along with these nifty pie molds, of which I received three) and was so happy to unwrap the package and have Yoda, Darth Vader, a Stormtrooper, and Boba Fett staring back at me.

And these cookie cutters are fabulous! I took the time to frost them all with royal icing to give to an even geekier friend for his birthday, but by frosting them, you lose all the neat details that the cutter adds (plus, they look great without adding so much work). 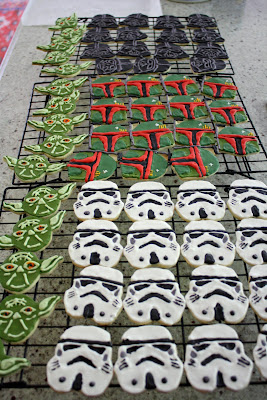 This was only the second time I've worked with royal icing, but this project was a million times more ambitious than my first adventure. Nevertheless, I have a better handle on the process and will surely be using it again.

Royal Icing
4 cups powdered sugar, sifted
4 Tbsp meringue powder (can be found at a craft store if not at the supermarket)
6 Tbsp water

Combine the ingredients in the bowl of a standing mixer. With the paddle attachment, mix on low speed for 7-8 minutes, until icing is more matte than glossy. This icing is still a little too stiff to work with, but it's better to mess around with smaller quantities than the whole batch. Keep icing covered to prevent from hardening.

Coloring: Gel coloring is a better choice than liquid dyes, but it's a little more expensive. The gel texture doesn't mess with the consistency of the icing the same way that liquid does. Either way, add a little at a time until you reach the desired color.

To pipe: Add water as needed to reach a consistency that will pipe easily (as stiff as you can make it while allowing it to be piped out of a bag in a continuous line). If the icing becomes too watery, add a little powdered sugar at a time and mix. Put some of the icing in a piping bag fitted with a small round tip and outline the area you want to be filled.

To flood: Water down the remaining colored frosting until it reaches a consistency that can run off the back of a spoon. Put icing in a squeeze bottle, or if you're like me and don't have all the proper tools on hand, use a spoon. Add icing to the areas that have been outlined and use a toothpick to push the icing into all the corners and to pop any air bubbles that might come up. Let dry for at least a few hours before adding any other details on top.

Store in an airtight container when frosting is not in use.

I learned all about royal icing from Annie's Eats - check out the blog to get more details from someone who knows much more about the topic than I do.
Posted by Pam at 4:24 PM

Wow. I'm impressed by the cookies - and your dedication. I do bake for birthdays, but I draw the line at going crosseyed over Yoda. :P