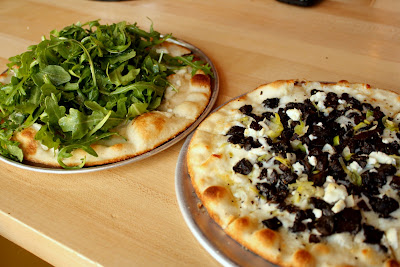 Weddings can be a great chance to explore a city that you're not familiar with. I had been to Baltimore a while ago, but most of what I remember from that trip was sitting in the back of my parents' car with my headphones on, trying to avoid interacting with them in any way possible. Oh, and the wonders of the Walters Art Museum.

My second visit to Baltimore was much more interesting. I attended my college friend Rick's wedding and got to spend the whole weekend with my college roommate Caroline. It was a short trip - Friday evening to Sunday afternoon - but we fit in a fair amount of food (yeah, and sightseeing too).

Friday night, after we checked in and took a bit of a stroll, we ended up at Brewer's Art for dinner. I had read online that dining in the bar was a good alternative to the pricier dining room, so we grabbed a small table with two tall wing back chairs and awkwardly made our way through dinner (oh, we need to place food orders at the bar? We need to yell to each other to be heard? OK, why not.). While we waited for our meal, a man in a suit towered over us, and we looked up to see our friend, the groom. Turns out we had picked the same spot as the rehearsal dinner, and since Rick is a foodie too, we knew we were in for some good food. We shared the falafel (fava beans, chickpeas, and green peas with lemon sesame vinaigrette, cucumber, arugula, and tomato), served with super-garlicky parmesan fries and the flatbread (smoked ham, herbed marscapone, bourbon-soaked cherries, mustard seeds, and arugula). They were both fantastic (despite the horrible picture I took of them), but I really loved the flatbread. It was crispy, creamy, smoky, sweet, and salty in every bite. I might have to suggest these toppings the next time my friends make grilled pizza... Brewer's Art also had Ace Pear Cider, which I've only had once before but loved.

On Saturday, we were surprised at how hard it was to find coffee in the morning. We kind of hovered outside one coffee shop until it opened at 10am. After that, we wandered towards Lexington Market to check out all the food stalls. We only ended up tasting an all-lump crab cake from the famous Faidley's, which was incredibly moist and filled with huge chunks of crab, but a lot of the other stalls were enticing.

Since the wedding wasn't until 7pm, we had a light meal at around 4 to tide us over. We stopped in at Iggies, and because of the hour, it was mostly empty. I was thrilled by this pizza and found myself wishing that Iggies had a branch in Boston. Caroline went with the Funghi (mushrooms, leeks, goat cheese, and housemade mozzarella), while I opted for the Pepe (arugula, ricotta, and lemon). The crust was perfectly crisp, and the toppings were light and fresh. The arugula, especially, was dressed just right (including a good amount of salt and pepper!). Man, I could go for one of these pizza right now, in fact. 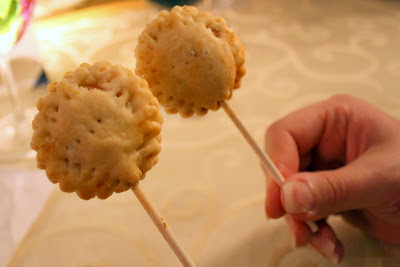 The wedding itself, held in the Peabody Library, was beautiful. Rick is Chinese and his wife is Jewish, and the rabbi did a wonderful job of combining their two traditions. The party was great, even though I only knew four people in the entire room, and the food was some of the fanciest I've seen at a wedding. For dessert, alongside the regular wedding cake (lemon raspberry), servers came around with mini pie pops (above), hazelnut mousse in a white chocolate cup, and other little sweet bites. It almost rivaled my friend Cicely's wedding, where the caterer, dressed in a red satin nehru-collared jacket and giant Dracula brooch, offered our very drunk group of friends warm cookies and cold milk. 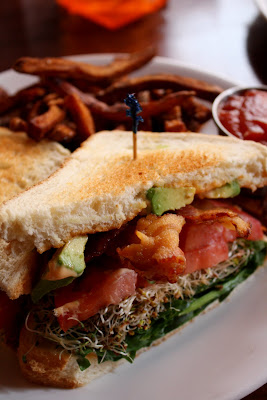 On Sunday, after brunch at our hotel with the bride and groom, I forced a tour of the Walters Gallery on Caroline (who has never been a big fan of art museums, but gracefully always goes along with my plans). I took a ton of pictures of ancient statues, as I am wont to do, and spent much less time in the more modern galleries.

We didn't have much time between the museum and our flights, so we wandered around a bit and finally settled on Maisy's. Our meal started off strong, with an excellent crab and artichoke dip, hot and cheesy. There definitely wasn't enough bread, but we didn't mind - we just cleaned up the plate with our forks. When it came to our entrees, though, things went very wrong. There were three things wrong with our two sandwiches. I sighed and just opted to eat mine(avocado, tomato, spinach, sprouts, spicy mayo, and I added bacon) (I asked for no mayo, but there weren't giant globs of it, just a light coating, so I wasn't too offended), but they screwed up Caroline's pretty bad. She sent it back, and the second try was still wrong. I'm pretty sure this wouldn't have happened if the waitress (the only one on the floor) had just written our order down instead of trying to remember it. At least the dip was good!

Long story short, my trip to Baltimore was a great time, but I wish I had had more time to explore the city. From the little research I did online, there's a lot of good food to be had there. I guess that just means I'll have to go back ;)
Posted by Pam at 11:01 PM