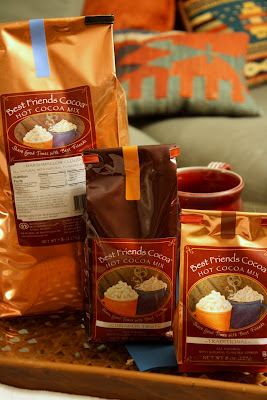 I'm not usually a big fan of cocoa - it gives me a stomach ache like nothing else - but there are times during the long, cold winter when you want something hot that isn't coffee or tea, or you just HAVE to have chocolate and there isn't a bar in sight. For years, I put up with the crappy box of packets from the supermarket when I needed a fix, but more often than not, I just went without.

A few weeks ago, though, I got an email from the folks at Best Friends Cocoa, and my thoughts changed drastically with one taste. By "folks," I mean Linda and Uri Guttman, who bought the company from its founder about 6 years ago when it was about to close. Since then, they've run the company from a small factory space in Arlington with just a few employees.

Like I said, Best Friends Cocoa changed my thoughts on cocoa as a whole. This stuff is smooth and sweet and comforting, while the supermarket stuff just tastes like dirty water in comparison. (It also doesn't give me a stomach ache - must be the all the chemicals in the mass-produced stuff.) It takes a little more effort to stir into your hot water (like I said, no chemicals means you have to do a little more work), but it's well worth it. If stirring is too much trouble for you, Best Friends Cocoa can also sell you a little battery-powered milk frother to mix up your cup of cocoa.

And did I mention flavors? Besides the traditional, which is fun to dress up with your favorite liqueur as a treat (I've enjoyed it with mint Bailey's as well as PAMA), they also offer Marshmallow Cloud (Linda's description is best: "a marshmallow toasting over a campfire, melting into your cup of cocoa"), Cinnamon Twist (a warm flavor with just a bit of kick), and Raspberry Truffle (Oh. My. God.). 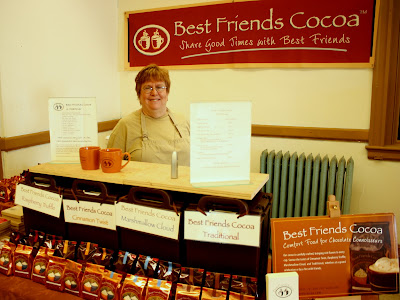 Best Friends Cocoa is available to order through their website (including a sampler pack so you can decide which is your favorite), at Whole Foods Markets in Massachusetts and Rhode Island, and through various markets and gift shops. Linda and Uri also have a table at Dedham's Indoor Farmers Market, held Sundays from 10am to 2pm in the Odd Fellows building at 626 High Street in Dedham. Above is Linda, Queen of Cocoa, holding court over her booth.
Posted by Pam at 6:38 PM

I picked up a bag of the cinnamon flavor a couple weeks ago at the Dedham Harvest Market. It is so tasty. Just the thing when I don't want to grind Taza or another Mexican style chocolate. Have you tried the raspberry one?

So glad you like it, Dina. Yes, the cinnamon is nice because it's just a little different than the other "spicy" cocoas or hot chocolates out there - the kick is more subtle and palatable. The raspberry is my favorite, I think, but it's also the most powerful - not a subtle flavor, but definitely a well-rounded one.