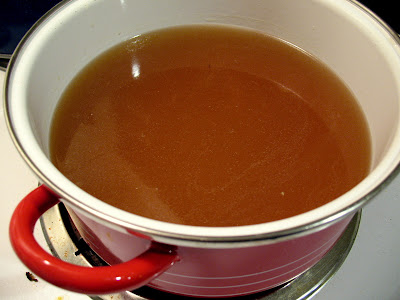 And it was easy!

I've been wanting to try my hand at stock for a while, especially last week when I woke up sick and wanted soup IMMEDIATELY. And a while ago, I stumbled across Michael Ruhlman's "recipe" for stock and knew it was just my speed.

So when I bought a delicious rotisserie chicken from Russo's this weekend (as did my friend Ann, who sent me home with her chicken carcass as well), it was time to try my hand at stock. I just dumped both sets of chicken bones in a large pot, covered them with water, and brought it up to a simmer on the stovetop. Once it was simmering, I stuck it in the oven (heated to somewhere between 180° and 200°) for about 5 hours. During the last hour, I added in some carrots, celery, parsnips, an onion, and a bouquet garni. The hardest part was, once the stock was all done, straining it through a coffee filter (sadly, no cheesecloth could be had in my house). This part took quite a while, but was still not hard at all.

The result? Clear, delicious, and nuanced stock that truly tastes like chicken. I can definitely see the benefit of this over the canned stuff. And with a technique as simple as this one, I doubt I'll be using that canned stuff too frequently (which means saving money and not having to lug heavy bags back from the store!).
Posted by Pam at 8:43 AM

As Michael Ruhlman points out, Thanksgiving is a great time for stock making, although I prefer Julia Child's stock recipe myself (from Mastering the Art of French Cooking). Turkey stock makes the best onion soup in the whole damn world! So when you're cleaning up after the feast, throw the carcass and bones in a freezer bag until you have time to use them. In fact my freezer usually has big ziplocs gathering material at all times: beef bones and scraps in one, past-prime vegies in another, and a third for chicken bones and scraps. But turkey -- the best.

Thanks for stopping by, Guy! I'm hoping I can grab the turkey bones from my brother's house come Thanksgiving...