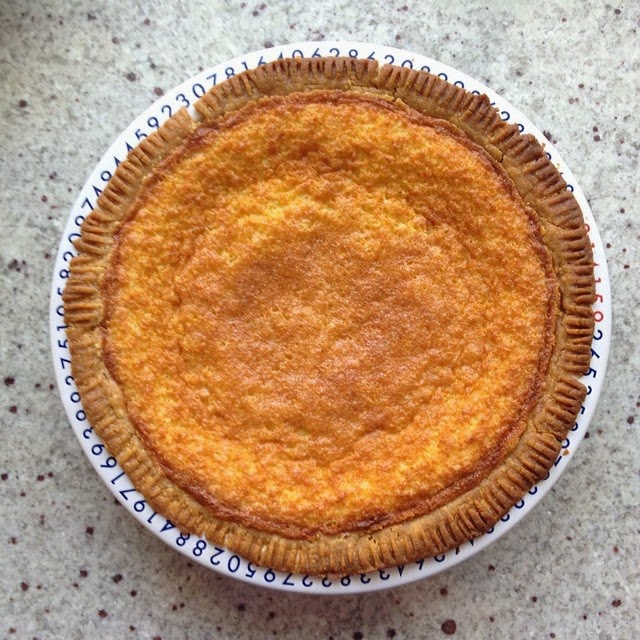 As I have said before, Pi Day has become a special holiday for me. I also much prefer pie over cake, which most people don't agree with. (And yes, that is a Pi dish in the picture above.)

Last year, I became enamored with the idea of making a chess pie. I don't know why - I had literally never tried a chess pie in my life and couldn't even describe one to you. But somehow, I got this idea in my head, and it just wouldn't let up. I read recipe after recipe, and they all varied by little bits (I even drew an elaborate chart to see how many tablespoons of this and how many cups of that went into each recipe I found). The recipe below is what I pulled together from my research. (I have no idea if this is indicative of traditional chess pie, but I really like how it turned out.)

A note about crust: I don't make my own crust anymore since going gluten-free. I'm still wobbly on gluten-free baking, and I haven't yet attempted pie crust. I have, however, found a gluten-free crust that I LOVE that's premade. It's the Whole Foods brand, found in their freezer section, and it comes two per package. I've used them for both sweet and savory pies and found them to be very tasty. Just take a look in the package before you buy them - sometimes the edges are a bit broken up. (And the pie in the photo above is not actually a Whole Foods crust - they look a little better than that.)

Preheat oven to 350°. Place pie crust on a baking sheet. Mix together sugar, cornmeal, eggs, and buttermilk until blended. Mix in melted butter and vanilla. Pour mixture into prepared pie crust. Bake for about 45 minutes or until the center is set. Cool before serving.

I like this. It seems simple and I like dessert very much. I always use brown sugar for dessert, I might try this with brown sugar too. :)

Buttermilk Cheese Pie for Pi Day!! I am in love with this recipe and will definitely try at home. I really like desserts and will be arranging a cute dessert bar in my birthday party at one of famous local party venues. Looking for ideas to make it awesome,

that so delicious..make me hungry hehe
thanks for sharing your artickel :-)

Great post on "Buttermilk Chess Pie for Pi Day". As a professional chef i have to appreciate your work. Keep Posting useful posts like this. Keep in touch with my websites- Culinary Institute | Chef Training Institute

this blog is very informative. all the tips are really helpful. keep it up

Really, this article is truly one of the best in the history of the article. I am an antique 'Article' collector and sometimes I read some new articles if I find it interesting. And I found this quite interesting and had to go into my collection.
Very good job!
agen domino99
daftar idpro poker
88dewa
aktifqq
armaniqq
aslibandar
aslidomino
bandarkiu
bandarq168
bandarqq


You can't believe what i just got,… A loan of $ 60,000. I have been looking for a loan for the past 2years until i was referred to a legitimate lender. Though it was not that easy to approve my loan, as you know nothing good comes easy. But I got my loan within 4 hours i got my loan, and before i knew it, the loan was transferred to me. please friends, don't let any body deceive you and scam you for this is real. Contact them via Email: gaincreditloan1@gmail.com OR You can also whatsApp them at: at +1-(901)676-0641 (WhatsApp Only)

Hii there, thank you for sharing. I’d like to tell you about Indian Maggi Instant Noodles which loved by almost everyone in India. Also you might know about Indian spices and their magic. You can order Indian Spices Online in the USA. And do not forget about Ayurvedic Himani Navratna Hair Oil massage it to keep you away from daily stress. Here Are Some Of The Most Favourite Instant Noodles And Loved By Almost Every Indian. Get Maggi Instant Noodles At Cartloot. If you want to know more, simply Click Here.

You can buy Indian grocery Online with all varieties from cartloot.
Cartloot is one of the Largest Online Shopping Store for Indian Food, mobile accessories, Baby Care, Beauty care, Safety product, prayer kits, and Indian jewelry, and more at a very affordable price. Order Now! And Get amazing Deals