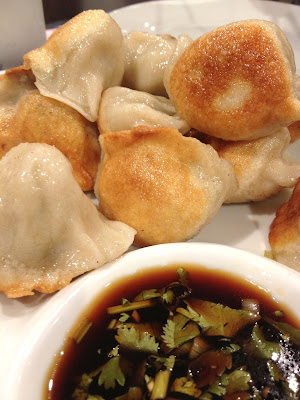 I will preface any post about Chinese food with this: I don't know much about Chinese food, other than what my rather Americanized palate enjoys. I don't know how any particular restaurant compares to "the real stuff" (whatever that may be), but I know what's tasty to me. And I only add this preface because there are a lot of people out there who do know about this, and they often speak down (write down?) to those of us who don't know what the names of all the dishes mean. That being said...

Szechuan's Dumpling is a new-ish Chinese restaurant in Arlington Heights; they've been open since around February. I had read some good things about it online, but I didn't visit until my friend Dave arranged for a few of us to try it out a few months ago. I have visited about once a week since then, and there are at least 3 other Chinese take-out spots between my house and Arlington Heights, so that should give you an idea of how good this place is.

No order is complete without their Pork Mini Juicy Dumplings (aka soup dumplings) and their pan-fried Pork and Chive Dumplings (above). I especially love the crispy sear that the pan-fried dumplings get, and the juxtaposition with the chewy dough and salty meat.

My absolute favorite dish at Szechuan's Dumplings, though, is the Eggplant with Basil Leaves. I will eat eggplant (especially the long, thin ones) in just about any presentation, but this one is sweet and salty and just a little spicy and absurdly addictive. I often find myself picking off the last few pieces and then mixing some rice into whatever sauce is left on the plate because it's just too good to leave behind.

There are many other tasty items on the menu (the Crispy Chicken with Basil Leaves and the Salt and Pepper Shrimp jump out at me), but I am so enamored by the dumplings and the eggplant that I have a hard time ordering anything else. We try to sneak in a new dish every time we eat at the restaurant itself, but it's hard when I've already established favorites!

Oohh! I'm going to have to stop by this place. Great review!

When are we going again? Try all of the things!