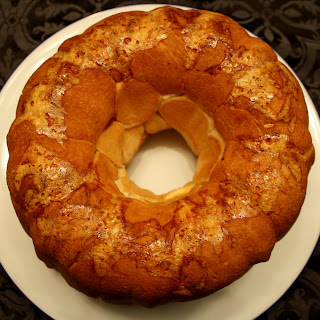 Can you believe that there are people out there who haven't yet tried monkey bread?! (Unless, of course, you are one of those people. Then I guess you don't know what you're missing.) When I told my friends that I had been invited to create a dish with Jarlsberg Dip for their 29 Ways to Leap into Jarlsberg Dip promotion and giveaway and that my dish would be monkey bread, I got more than one blank stare in return.

First, they were confused by Jarlsberg Dip (as was I, before I made this dish). It's a creamy concoction featuring the wonderfully nutty and subtle Jarlsberg cheese. It's just starting to pop up in stores. I used the dip plus regular Jarlsberg cheese in my dish.

And then, more horrifyingly, they were confused by the term "monkey bread." They wanted to know why it was called that, and I couldn't give them a clear answer. (The Internets didn't help me here, either.) Once I put this bad boy in the oven and they started to smell it as it baked, though, they didn't care about the name anymore.

There was pretty much no talking after I pulled this out of the oven (unless you count the mumbles asking for the plate to be passed around the table again). I still don't think I've adequately answered their questions about the term monkey bread...

One note: When I made this, I only sprinkled some of the grated Jarlsberg in the bottom of the pan. When it came time to eat, the extra-cheesy bits were my favorite, and I was sad that I hadn't incorporated more into the final dish. Below I have amended my recipe to include more grated cheese, which would make your monkey bread look a little different than mine. 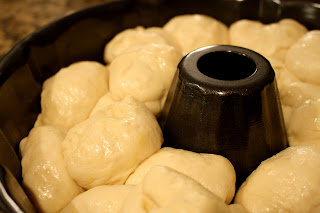 In a small pan, heat butter over medium heat until melted. Add garlic and heat until garlic begins to brown. Remove from heat and cool slightly. Brush interior of a bundt pan with garlic butter and set aside.

Divide dough into even pieces about the size of a golf ball. Flatten each ball and place a small dollop of Jarlsberg Dip in the center. Pinch together the edges of the dough around the dip to seal closed. Brush with melted butter and roll in grated cheese before positioning in the prepared bundt pan. Repeat with remaining dough. Once all the dough has been used, cover the pan and let rest on the counter for 30-60 minutes.

While the monkey bread is resting, preheat the oven to 400°. Bake for 25-35 minutes, or until the top is nicely golden. The monkey bread will rise a lot in the oven. Cool slightly before inverting onto a plate. Serve hot!

Jarlsberg wants you to Leap into Jarlsberg Dip too by sharing how you would use Jarlsberg Dip. The winner of the giveaway will win a tailgate tote stocked with Jarlsberg Lite Cheese, new Jarlsberg Cheese Dip, Snofrisk (a Norwegian style cream cheese), crispbreads, honey cremes, and honey vinegar. More details are available on their website.


Full Disclosure note: I was compensated for my time and groceries by Jarlsberg, but my opinions are all mine.
Posted by Pam at 8:00 AM

I made a savory monkey bread for a few friends and they were obsessed with it! It is just a fun dish to make (and eat)!

Oh my yes! I know (and love) Monkey Bread. In my house, it has always been sweet (cinnamon, pecans, sugar, etc.), but I can totally get behind this savory version. Wish I had a batch of it baking up right now. Thanks for the inspiration!