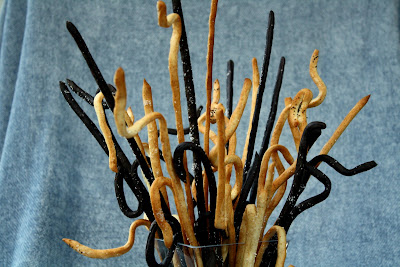 Every Halloween, my friend Ann and I throw a party, filled with candy, dry ice, costumes, pumpkins, and lots of good food. We always have a good time coming up with items that are both delicious and spooky. Last year, I came across an idea somewhere (probably in one of the many Halloween magazines we pore over) to make tentacle breadsticks. I used store-bought pizza dough and managed to make some vaguely squiggly breadsticks, which we immediately dubbed Cthulhu Sticks (what, we're not super geeky or anything).

I was pleased enough with my experiment last year to try making them again, but not pleased enough. Instead of going the pizza dough route, I found a recipe for grissini (those long, thin Italian breadsticks).  The dough is pretty simple to put together and is fairly forgiving of being worked, plus I found countless tips online about using a pasta machine to roll out and cut grissini so that they're uniform (and last year, the tentacles were anything but uniform).

I am so much happier with how the Cthulhu Sticks turned out this year. I opted to color half the dough black (I used gel food coloring, but you could use squid ink if you want something more natural), which I think gives them a spooky feel. Sea salt on the black ones and poppy seeds on the white ones add a look of suckers to the tentacles, but you can add whatever toppings (or even mix something into the dough) that you'd like. 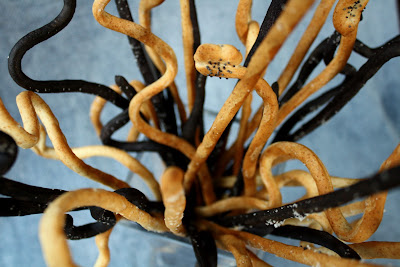 Combine water, yeast, sugar, and 1/2 cup flour in a large bowl. Rest 10 minutes. Add remaining flour, oil, and salt (also any herbs or spices you could like. If coloring the entire batch, add food coloring now. Otherwise, wait until dough is more solid before kneading it in). Knead about 5 minutes, until dough is smooth and elastic. Place dough in a greased bowl, cover with plastic wrap, and let rise 1 hour.

Preheat oven to 400° and move oven rack to the top position.

Divide dough into four pieces. Using pasta roller, roll into a roughly 9x4 rectangle on the thickest or second-to-thickest setting. Cut with fettuccine cutter. Arrange grissini on parchment-lined baking sheets, keeping one end straight (so they can stand in a vase) and one end tentacle-y. Brush with olive oil and sprinkle on salt or additional toppings. Bake 8-10 minutes until golden (well, at least for the ones that aren't black) and cool on a wire rack.

To serve, arrange in a vase to get the full tentacle effect.
Posted by Pam at 1:46 PM