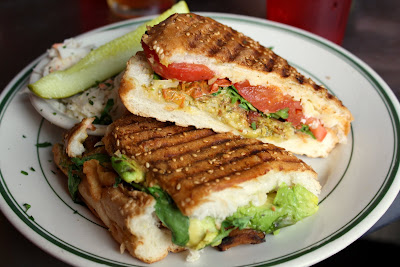 OK, this review is a little late, but better late than never, right?

"Sandwich" is a pretty vague term, encompassing just about anything put between two pieces of bread. You could put a gourmet meal in between that bread, and it would still be given the name "sandwich." And yet, when people say "let's go out for lunch and grab a sandwich," I'm left cringing. I am greatly adverse to cold cuts, which is the staple of most sandwich shops.

So when I was asked to try out the All Star Sandwich Bar in Inman Square, I wasn't sure what to expect. The restaurant was started in 2006 by Chris Schlesinger, of the nearby East Coast Grill, so it was clear that there would be something a little nicer than cold cuts in the kitchen. Two years ago, brothers Kosta and Johnny Diamantopoulos took over, and they're doing a hell of a job. The space is brightly painted, and everything is made fresh on premises.

I pored through the menu, trying to decide what to order. I really wanted a hot dog (they serve Pearl dogs, the best around), but I figured that wouldn't be a fair assessment of what the restaurant serves. The menu is only roughly half of what is available daily - specials are always available. I ended up going with the (poorly-named) Cheese sandwich, which includes not just Monterey Jack cheese, but also bacon, avocado, roasted tomatoes, watercress, and spicy sweet corn aioli, all on scali bread. It sounds like a lot of clashing flavors, but everything went very well together (even if it's not the most photogenic sandwich thanks to the mushing of the avocado, aioli, and tomatoes). I was really impressed with the quality of the ingredients - this is no sandwich slapped together by the guy behind the sneeze guard at Subway. Kosta wanted to make sure we bloggers (who included Jackie of Leather District Gourmet, Rachel of Fork It Over, Boston!, and Rich of The Passionate Foodie) tried their cornbread, which had just come out of the over. It's amazing how many variations of cornbread are out there, and I'm happy to say that this is one of the best cornbreads I've had - soft with a crisp exterior, moist, and actually tasting like corn. The cornbread comes with the chili, but I'd be happy to order a piece for dessert.

Sandwiches at the All Star Sandwich Bar run around $9, which seems a little steep when you think of it as "just a sandwich place." But when you think about the amount of ingredients that go into these sandwiches, and the fact that they're about 10 times tastier than something you could get at any sub shop, the price is more reasonable. Plus, there's a jar of oreos on the counter, so dessert is free :)

Full Disclosure note: My lunch at All Star Sandwich Bar was provided free-of-charge.
Posted by Pam at 11:36 AM

I also love their beer selection and yummy, yummy fries! I don't go here nearly enough but definitely a great place to highlight!

I love All Star! I live right down the street and end up getting takeout from there a few times a month. "Cheese" isn't actually the name of a sandwich there but rather the Specials category it falls under. There's always a cheese, veggie, funky, extra funky, etc., special each day. As for regular items on the menu, I love the meatloaf sandwich and the BLT. My boyfriend loves the hotdog and the chili, which is bean-free. And we both love the fries with jack cheese.

Our dog loves that they leave water out for him (and other dogs, of course).