Bacon Vodka, the Oddest Drink I've Had in a Long Time 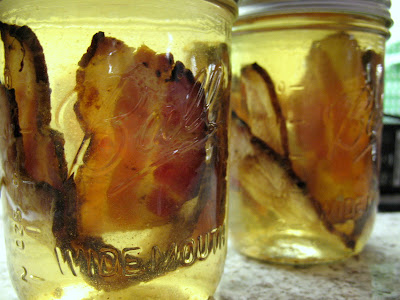 It's been, oh geez, a month since I went to my first tasting at Downtown Wine & Spirits in Davis Square. I used to shop there frequently during college, but it was rather inconvenient when I lived in Brookline. It took a mysterious tweet from Citysearch Boston regarding a bacon liquor tasting to get me back in there.

The tasting was a great time - a bunch of people crowded around the small bar, shuffling around patiently to try tastes (big tastes) of three different beers, three different wines, and a homemade bacon vodka. The beers and wines were only bacon-y in spirit - smoky aroma and flavor can go a long way, especially when you already have bacon on the brain. I thought the vodka, though, was pretty awesome. Well, maybe not that vodka, but the concept of bacon vodka? Yep, pretty cool.

So when my older brother's birthday rolled around only a few weeks later and I had no idea what to get for him, I thought I'd try my hand at bacon vodka and give him something to talk about with his poker-playing buddies. Making bacon vodka is SIMPLE - there's probably only about 30 minutes of work involved.

When it came time to actually drink the vodka, though, I wasn't sure what to do. It was too salty to drink on its own (and god knows I love me some salt!). I stumbled across some recipes from Bakon Vodka (as far as I know, the only bacon-flavored vodka available in stores) and decided to give the prosciutto-wrapped bacon cocktail a try. I've tweaked it a bit below to better suit my tastes. Their drink list is intriguing, though, and I really want to give the Irish Boar a try too.

The thought of salty vodka may turn some people off, but it's worth giving a try. If nothing else, it's certainly a conversation piece. And if you're interested in other tastings (strange and straight forward alike) from Downtown Wine & Spirits, keep an eye on their website and Twitter. 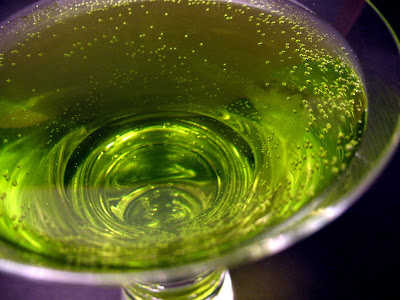 Bacon Vodka
3 slices of bacon, cooked and grease blotted off
about 2 cups vodka (something you would drink on its own)

Place the cooked bacon into a pint jar or a similar non-reactive container that can be sealed. Fill with vodka. Place the jar in a dark cabinet for one week, then place the jar in the freezer overnight to help the fat solidify. Pour the vodka through a paper coffee filter (once or twice) - the resulting vodka should be clear with no little fat globs floating around. Clean out the pint jar, then pour vodka back in and store in the freezer.

Combine bacon vodka and melon liqueur with ice in a cocktail shaker and shake until chilled. Strain into a martini glass and top with a splash of chilled seltzer.
Posted by Pam at 11:30 PM

This is hilarious! I've been intrigued by your bacon vodka making adventures since reading your tweet a few weeks ago. Thanks for sharing.

Bacon goes with everything, right?

Glad you think so, Erin. Adventures are a good word for it.

Right you are, Nancy!!

What else can you do in a snowstorm in Charlestown than drink a bloody mary featuring your bacon vodka in it?!