The Edible Word: Confections of a Closet Master Baker, Part 2, Plus my recipe for Katayif 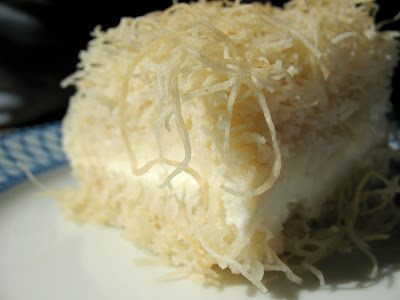 As I mentioned, one of the moments that hit me hardest while reading Confections of a Closet Master Baker

was when Gesine was talking about her mother's favorite recipe, Zwetschgendatschi. She talks about baking this for her mother as she was dying from cancer, and she talks about baking this for a man who had first tasted it in Germany during World War II. It's a short chapter, but I fought off tears as I read that her mother, who kept a very strict diet, made and ate an entire tart on the day she dropped Gesine off at college, and how Gesine made her version for her aunt's birthday. I wanted to go home and bake one immediately, to pay tribute to tradition and family (even if it's not my own family or my own tradition).

But I discovered that my mother had taken the tart pans with her to our summer house, and my friend only had a large tart pan (too large for the recipe in the book) for me to borrow. I'll hold off on making Zwetschgendatschi, then, until I can do it right.

In the meantime, I wanted to contribute a recipe to the Edible Word that means something to me. It's not my mother's favorite recipe, nor does it hold any special memories like Gesine's Zwetschgendatschi, but it does remind me of family and tradition and all that jazz.

I don't read or write or speak Armenian, which definitely separates me from many of my Armenian friends and acquaintances. Being second/third generation American can do that to you. But between my mother and my own curiosity, I have learned to make many Armenian dishes that my peers would never contemplate making. I grew up eating many of these dishes, but there are few in my generation who make them, and they are something of a lost art now.

I remember going to a cooking class at our church when I was a kid (one of the few times that non-religious me stepped into a church) and watching all the old ladies, dressed in black with their hair tied up in buns, as they showed us how to bake things like simit. And I remember sitting at my grandmother's kitchen table, "helping" (but really just mucking everything up) as we made berag and she taught me how to fold the dough into tight little triangles.

Katayif is another Armenian dish that you don't find all that often. And that's a shame, because it is pretty easy and amazingly delicious. It used shredded filo dough (often labeled “Kataifi" on the package) and a delicious vanilla custard that thickens up (especially when eaten straight out of the fridge). One pan serves a ton of people, too, so it's great to serve at a party.

Cream katayif also always makes me laugh. When pronounced correctly, the "K" sounds like you're clearing your throat, kind of like the word "loch". And somehow, the "C" of cream invariably always gets pronounced the same way. But "cream" is in English, and "katayif" is in Armenian, and yet they both get the Armenian pronunciation. My brothers and I always over-pronounce the hell out of those "C"s and "K"s, and just thinking about it makes me laugh. 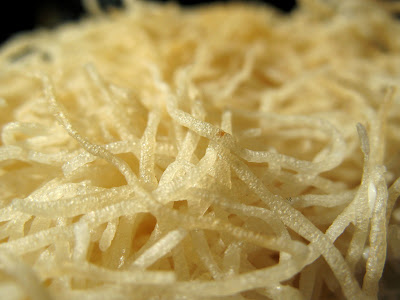 Make filling ahead of time and cool completely before proceeding. Combine heavy cream, light cream, sugar, and vanilla in a medium saucepan. Mix cornstarch and milk together until cornstarch is dissolved, then add to cream mixture. Bring to a boil over medium heat, stirring constantly until thickened (to pudding consistency). Cool completely.

Preheat oven to 375°. Butter the bottom and sides of an 11x15 inch pan. In your largest mixing bowl, pull apart 1 pound of dough until it is light and fluffy and there are no clumps. Pour ½ lb (2 sticks) of melted butter over the dough and toss to coat evenly. Press dough into the pan, patting down as tightly as possible. Pour cooled custard evenly over the dough. Repeat the shredding and buttering process with the second pound of dough and ½ pound butter, then press into pan over the custard.

Bake for 30-40 minutes, or until golden brown. While kadayif is baking, combine sugar, water, and vanilla extract in a small pan and bring to a boil, stirring to dissolve sugar. Boil until syrup is clear.

Pour hot syrup over hot katayif, then cover with foil for 15 minutes. Cut into squares and serve warm or at room temperature. Leftovers are good straight from the fridge.
Posted by Pam at 11:32 AM

This sounds delicious and I loved learning about your heritage :) I know exactly what you mean about preserving culinary traditions that are disappearing.

I was headed with a friend to Harvard Square one Saturday during first year of law school We were taking the bus from Watertown, and on the way, we passed an Armenian church that was having some sort of crafts fair/fundraising lunch.

We got off the bus, and I had keyma and kayadif for the first time - both delicious. As I recall, we didn't make it to Harvard Square that day.

I'm a big fan of Armenian food, but I've never tried Kayadif. Yours is beautiful!!

Thanks, guys! If you ever need recommendations for good things to buy in the Watertown shops, let me know ;)