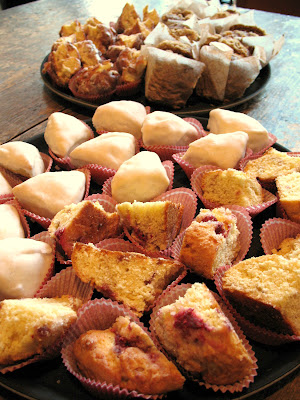 A while ago, I mentioned that I was enjoying the new tea drinks at Starbucks. What I didn't mention, though, was that I was so enjoying the London Fog latte that I couldn't convince myself to order any of the others, so I had no idea what they tasted like.

Luckily for me, not long after, I was invited to a tea tasting at Starbucks, an event with the sole intention of getting Boston-area bloggers to try all the new tea drink flavors. I was joined by many different local blogs - The Boston Teacup, Yogurt and Berries, Tri 2 Cook, Carrots 'N' Cake, Healthy and Sane, and The Boston Foodie- and we all enjoyed the chance to taste lots of delicious goodies and talk about blogging. We were also lucky to be joined by Missy Franklin, a local Starbucks tea and coffee master, who walked us through our tasting. 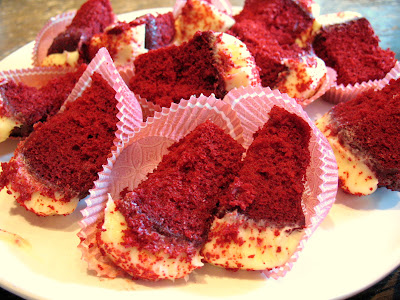 We started with the lattes - full-leaf tea bags, steeped in water, sweetened with syrup (simple or vanilla), and topped with steamed milk (water to milk ratio is 1:1). They're all ready to drink as soon as they're handed to you, but I preferred to let them steep a while longer for a more intense taste.

The Black Tea Latte was simple and comforting - the tea version of a regular espresso latte. The tea is a bit sweet and tart, like caramel and black cherries. Understandably, it pairs well with the apple bran muffins, which are studded with sour cherries - the tart and sweet from the fruit really does bring out those similar flavors in the drink. We also paired it with slices of lemon loaf, which is bursting with lemon flavor - yum!

The London Fog Latte was next, and the only one I was familiar with. The tea used in this is slightly different than the regular Earl Grey bags used for cups of tea - they include lavender on top of the bergamot, which always makes for a richer flavor (at least, for me). Because they add vanilla syrup to this one, it had a broader sweetness, and the lavender gives it more of a floral taste. We paired this one with raspberry and mini vanilla scones. The vanilla scones are drier and sweeter, while the raspberry scones have a great tangy flavor (from both the dough and the berries) and a bit of crunch from the sugar topping.

Next up was the Vanilla Rooibos Tea Latte. Rooibus (pronounced ROY-bus) is fruity, with a little bit of spice, and it's a great caffeine-free alternative to chai. It had a great honey aroma, which Missy informed us was coming from the combination of the vanilla and the mix of spices. I was surprised at how much I enjoyed this one, especially considering that caffeine is usually a big factor in my wanting a latte :) But the fruitiness melded really well with the milk, forming a light but flavorful treat. This one was paired with red velvet cupcakes - who doesn't love a red velvet cupcake?

We then moved on to the tea infusions, which blended chai concentrate with rich juices. The Berry Chai Infusion was a burst of berries, currents, and spice, and after one person remarked that it tasted like mulled wine, that was pretty much all I could taste. The Apple Chair Infusion is similar, with the chai blended with sweet apple juice - this one tasted like a spicier version of the steamed cider that Starbucks offers in the fall. Neither of these were really my "cup of tea" (if you will) because I'm not a fan of the spiciness of the chai. We paired with Berry infusion with blueberry and cinnamon coffee cakes, but they'd work well with anything containing fruits or spices. The Apple infusion was paired with an apple fritter, which I absolutely loved - apple donuts? Yes please!

So thanks to Starbucks for introducing me to all the new tea flavors that they have on hand. The funny thing is, though, that I think the London Fog is still my favorite, and I'll definitely keep ordering that one.
Posted by Pam at 11:39 AM

Great to meet you pam :) i knew you looked familiar! great recap, i had forgotten that the vanilla rooibus was caffeine free

Ooh. I like the sound of the London Fog latte, too.

I really like the rooibos latte and the apple chai :) I saw somewhere that the tea drinks are only $2 every Tuesday afternoon in February (after 2pm, I think.) I'm not sure if all locations are doing it or not. I'm glad that they're branching into tea drinks. There's a Starbucks right next to my school building, so I find myself there embarrassingly often, but I'm not a coffee drinker so I've been really getting sick of hot chocolate!

I've also has the London Fog latte and thought it was great!

Studies had proven that the person who drinks green tea is more likely to lose weight 10% faster than the person who doesn’t drink green tea. Green tea contains EGCG which increases the rate of your metabolism through its well known antioxidant powers.