Prior to starting this blog, there were many foods and cuisines that I rarely ate. French was definitely one of them, and for no particular reason. I went to France a couple of times when I was a teen, but I mostly subsisted on crepes, baguettes with ham and cheese, and poorly-prepared hotel salmon - oh, and whatever (and I do mean whatever) wine was nearby. I've expanded my French repertoire since then, and I'm always happy to try another restaurant.

So when I received an email from Chris Lyons of Lyons Communications about a blogger's dinner at Sandrine's in Harvard Square, I knew this would be an excellent chance to experience the real deal. Chef Raymond Ost is a Maître de Cuisiniers (Master Chef of France); the group's mission includes "to preserve and spread the French culinary arts," so I know I got a good representation of French cuisine. Sandrine's doesn't just do a more generalized French cuisine, however; Chef Ost focuses on the food of Alsace, so many of the foods (and wines) we tried were specialties of the region. 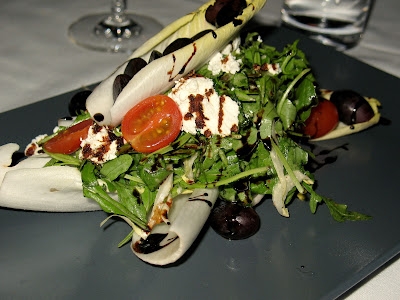 This was also a great chance to meet some of my fellow bloggers, all of whom I've been reading for a while now. Along with Chris, I got to enjoy the company of Richard from The Passionate Foodie, Jacqueline from The Leather District Gourmet, Adele from The Basil Queen, and Megan from MenuPages. We sat for three hours, talking not only about what we were eating, but also what we have eaten and what we'd like to eat - just my kind of company :)

We started with two Flammekueches (one was traditional, with bacon and caramelized onions, and the other featured mushrooms and Swiss cheese). With a crispy, brick-oven-cooked crust and just the right amount of toppings, these were fantastic. They're a great bar food or a perfect way to start a nice long meal.

While most of the table moved on to the foie gras for their appetizers, I went with the endive and roquette (arugula) salad, with black grapes, goat cheese, cherry tomatoes, and a champagne vinaigrette. The mixture of bitter and sweet, fresh and tangy, crisp and soft, all made for an incredibly well-composed salad. This is definitely not just a bunch of ingredients thrown together in a bowl. Each bite was a different combination of flavors, and it never got old. I'd probably eat more salads if they were all like this. 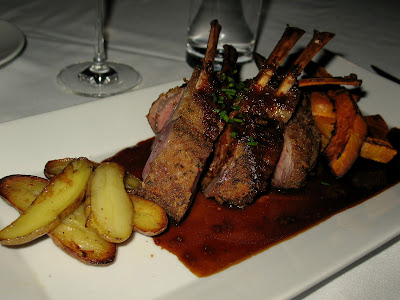 For the main course, we had lots of great options, and I had a hard time making a decision. The Alsatian Choucroute Garnie is the house speciality , but I'm not always wild about sausages, and the Lobster Risotto sounded right up my alley. I ended up going with the Rack of Lamb, however, since I rarely cook meat at home, and rack of lamb is something I tend to leave to the professionals. I'm so glad I made that choice, too, because the lamb was intensely satisfying. The meat itself was cooked perfectly (not that you can tell in that picture), with a crispy Herbes de Provence crust and a warm but medium-rare middle. The accompanying roasted potatoes and butternut squash were what everyone hopes for from roasted veggies - a good mix of crispy edges and creamy interior (I probably could have just eaten another serving of the squash for dessert, in fact). 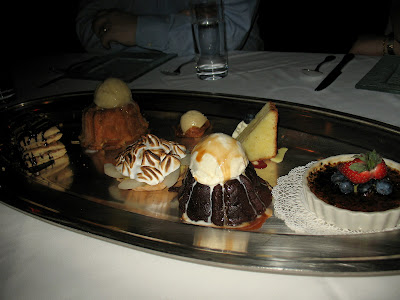 But I didn't, because they brought out this behemoth for us. The platter took up most of the table, and we managed to stuff ourselves silly by trying each of the fabulous desserts. My favorite was the kugelhopf, which puts most Boston-area molten chocolate cakes to shame. But really, they were all good - even the banana sorbet and the pear meringue (neither of which I would ever order). The six of us did a disturbingly good job of cleaning this plate - another reason to love eating with foodies is that they're not shy about going back for another bite!

So overall, I highly enjoyed my time at Sandrine's. At it's mid-range price point, it would be a great place to go for a nice night out with friends, but really, I'm already dreaming of sitting at the bar for some wine, a flammekueche, and a kugelhopf. See, my knowledge of French foods really was expanded!!

simply brilliant!!!! writing my article as we speak.

I'm glad someone else looked at the bar and wondered if they could persuade their friends to trek out to Harvard square for a night out. :)

Another fun take on a wonderful dinner!

My friends and I were just planning to find a nice French restaurant to try this weekend, and we've been asking for recommendations these past few days. Nevertheless, we remained undecided... until now!

This blog entry was perfect timing!

Thanks, guys! Again, I was thrilled to be able to meet my fellow bloggers :)

Lhydium, definitely give it a try! And save room for dessert!

First, I want to say that I've decided that it's a bad idea to read your blog when I'm HUNGRY. After reading about your croissants, I almost hopped in my car and went on a mission to find a good croissant in Northampton. Second, thanks for writing about Sandrine's. I'm always looking for a good place in Cambridge for those occasions when my fairy godmother offers to take me out for dinner.