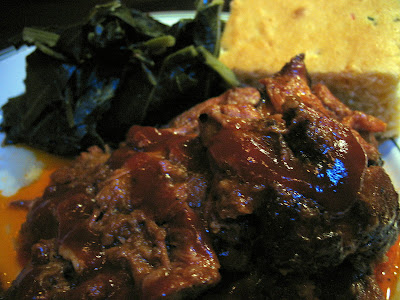 If you know me at all, you know I'm a huge fan of the Publick House. The roomie and I eat there a lot, but I hate waiting for a table, so we usually sit at the bar where he can talk beer with the bartenders and I can stare off into space. So when we heard a few months ago that they were opening another restaurant, this time 2 blocks closer to our place (as if PH was sooo far), I became giddy.

And so Roadhouse, Publick House's sister restaurant, opened this week, to excitement from beer-lovers and food-lovers alike.

We went on the second day they were open, meaning I had plenty of time to read all the poor reviews beforehand. I tried to steel myself for a crappy time, knowing I would chalk it up to opening kinks that would get ironed out later. But I was pleasantly surprised and am looking forward to going back now.

Overall, the atmosphere leaves a little to be desired, especially if you're used to the more homey feeling of the Publick House. The two-bar setup is nice, though, with a larger, circular bar at the entrance, and a smaller, straight bar at the far end of the restaurant. There's also a huge patio, but it was closed due to yesterday's deluge.

For right now, Roadhouse only has beer on tap - no bottles. They also have no ciders on tap (I don't do beer), so I'll have to wait until the bottles come in to try their selection.

I opted for the pulled pork platter, which comes with one side and a chunk of cornbread (plain or cheddar jalapeno). The pork came in larger chunks than I expected, doused in a sweet and vinegary sauce. There was a lot of gristle in with the meat, though, which left me happy that I ordered the platter and not the sandwich so that I could more effectively pick through the fat. The meat was tender and a beautiful shade of pink, thanks to the smoking process. The side of cornbread was also very good - cakey and not overly sweet. The cheddar and jalapeno were not pronounced, but instead just added hints of their flavors.

The major failing point for the evening, though, was the collard greens. They came in huge chunks (the leaves weren't cut at all) and were very dry and somewhat undercooked. Oh, and (I think) vegetarian - there was not enough salt in the greens for there to have been meat in there at all. The fries that I stole from my roommates plate, though, were very good, with skin on and a decent dose of salt. I'll be opting for something other than the collards next time I go.

Sorry for the crappy picture; it was dark and I was trying to go for the no-flash thing. Hopefully I'll have better pictures if we can get out on the patio before it gets too cold.

If you want some help doing an Allston/Brighton/Brookline BBQ crawl for a special blog feature, you know who to call. Despite my initial misgivings, the boy and I are pretty devoted to Smoken' Joe's. Living three blocks away does help...

meh. I ate there opening night and was not impressed (maybe because it was opening night?). if you're willing to make the trek Tennessee's in Framingham is pretty amazing.

Thanks for the review.