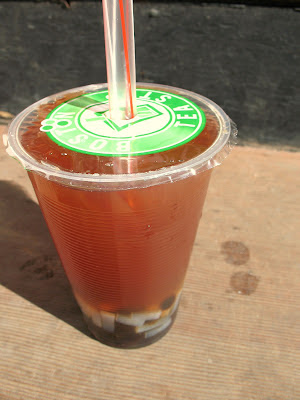 Let me preface this post by saying I know very little about boba tea - only what I like. I tend to favor more floral flavors, and I can't stomach an entire serving of the little black tapioca pearls. When I first tried the stuff during college, the pearls were too rubbery, and all I could taste was a fake-sweet fruitiness that turned me off.

Luckily, it didn't take me too long to find some better places for bubble tea. During college, it was Tapicha in Porter Exchange - I would walk over to Porter Square on nice days to grab a lychee tea with half pearls/half coconut jelly.

Not too long after, Boston Tea Stop opened in Harvard Square (first by where the busses sit before starting their routes, now on JFK St, across from the Staples). I was enamored by their name and their quirky version of the MBTA's train map done with tea flavors instead of stations (this used to be on their website, which no longer exists). And then, I found out they stock rose-flavoring, and I was in love. 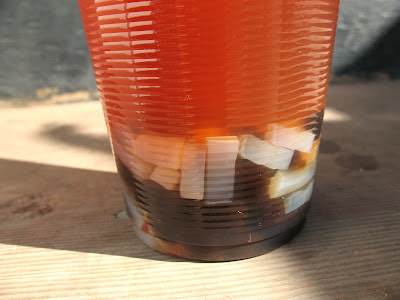 So my standard order at Boston Tea Stop is a black tea with rose flower and half pearls/half lychee jelly. They have so many choices that it can be hard to decide, but I hate to waver from my favorite. They offer teas in black or green, with or without milk, hot or cold or frozen. In addition to the bubble teas, they also serve dumplings (which I haven't tried, but about which I've heard good things) and a wide variety of mochi ice cream (or flesh balls, as my friend April termed them).

Sadly, I'm not in Harvard Square very often, but when I am, I try to fit in a visit to Boston Tea Stop.

How do you order your bubble tea?

I'm a big fan of Thai Tea boba. Yes, it's sweet, but there's something about the Thai tea and the condensed milk...

Milky and tapioca laden.. yum! But nothing beats a mochi in the summer. Hopefully I'll forget the "flesh ball" image by then...

Milky tea has never been my thing, but it seems like everyone likes it, so I guess I'll have to give it a try.

Jef, did you try the Thai iced tea ice cream from JP Licks a few months back?