My Kind of Conversation Hearts 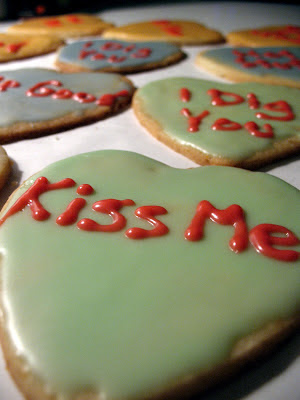 Being a Boston girl, I have a fond place in my heart for NECCO (the New England Cofectionary Company, based in Revere) and their Conversation Hearts (and NECCO wafers, which have the same consistency, but better flavors, like chocolate). I am not, however, a fan of the chalky texture of the candy - it reminds me too much of Tums, but with less acid-reduction.

But what would Valentine's Day be without Conversation Hearts?

So I made my own (more-palatable) version. 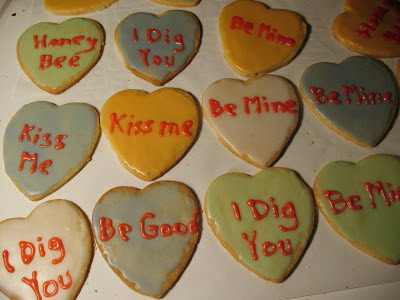 I have crappy penmanship, and I had a hard time getting the frosting to the right consistancy, but they turned out ok. I used many of the same sayings that are on the candies. My favorite that I added myself, though, is "I Dig You," because I'll be taking these into work, and my office is filled with archaeologists.

The cookies themselves are orange shortbread, adapted from a recipe in Elinor Klivans "Big Fat Cookies". Best cookbook name ever, right? I added the zest of one blood orange (for Valentine's irony) and about 2 Tbsp of juice from the orange, but Klivans offers other examples of ways to change up that recipe and many others.
Posted by Pam at 11:58 PM