Fresh from the Farm 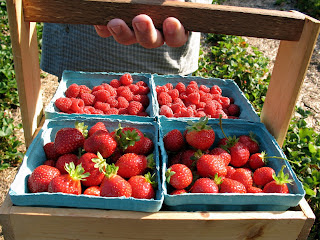 Behold the bounty of my weekend apple-picking trip to Parlee Farms. Wait, those aren't apples... 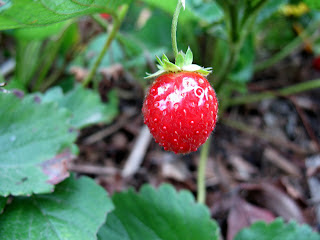 Apple picking at Parlee has become a tradition with my friends - this is the 4th or 5th year we've gone. It's enough of a tradition that we've developed a pattern as to how the day should go: raspberry picking, hayride out to the apples, apple picking, walk back to the farmstand, eat ice cream and apple crisp, shake off dirt on the way back to the car, nearly fall asleep on the drive home.

Out entire schedule was thrown off, though, when we were told that they were still picking strawberries. In October? Sure, considering we've had such mild weather all September.

Now, the only fresh-from-the-plant strawberries I've ever had were from a sad plant that my father and I tried to coax into blooming one year. These berries, however, were amazing. When I ate my first one, right off the vine, I stopped in my tracks and said "Woah, that's good." My friends laughed... then they tried the berries and couldn't help but have the same reaction. It was like a little epiphany of how good fruit can be. I don't think I can ever buy supermarket strawberries again... The raspberries were, as ever, fantastic - tart and sweet. The plants were all new (the patch was moved this year from another location on the farm), so they were small and weren't producing an abundance of fruit. And it seemed as if these raspberry plants were housing all of the disappearing bee population. 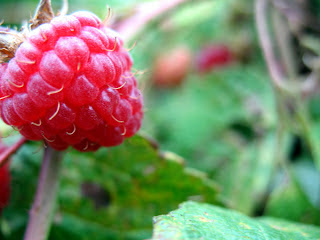 And the apples? No pictures of the apples? To tell the truth, that was the least exciting part of the day - they weren't picking what they said they were picking, but after we had filled our bags, they had reopened the previously-closed rows. And the trees were picked pretty clean, so there wasn't much to take pictures of, even. But now, our fridge is filled with apples and berries, enough to last us a while.
Posted by Pam at 8:02 AM

I was at Parlee the last Sat. in September - there was great apple picking then and it was a beautiful day. I decided to just buy a thing of rasberries and blueberries instead of picking which saved on time. They are a great farm and I was semi-hoping I would run into you! But Lauren said she ran into you?? awesome...