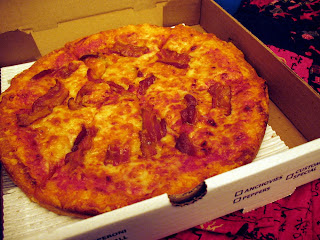 OK, so maybe this wasn't the best time to start a cooking blog.

I've recently moved, and my kitchen is still not in order. I mean, it's better than when I first moved in, but there's still stuff everywhere. I find that I've been spending my time getting everything set up instead of actually cooking. The frozen aisle at Trader Joe's has been my best friend in the past few weeks.

Today, though, called for pizza, the most important food during a move. In Boston, we have many different types of pizza, but my favorite is "Greek pizza." Any pizza joint named "House of ..." is typically Greek-owned in this area. The dough has a good amount of chew, the crust is extra crispy, and the cheese forms beautifully browned spots of goodness. The sauce isn't very sweet, and there's grease everywhere.

This one is topped with bacon... they used large strips, which crisped up wonderfully in the oven. This is one of my favorite's from childhood, but I don't order it often, or I'd be dead.

In addition to a new apartment, I also have a new camera. These pics aren't great, but I'm still learning. And I was too hungry to take many pictures... 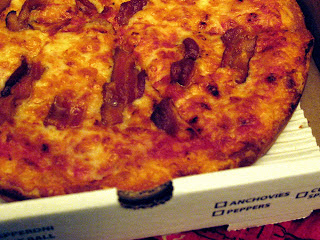