Matt's in the Market, Seattle 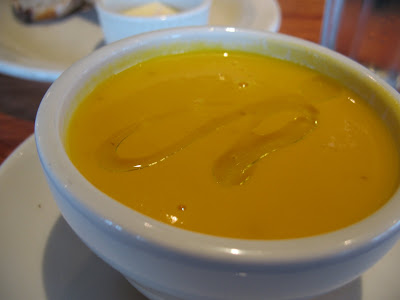 From doing my diligent work on Chowhound before my Seattle trip, I learned that Matt's in the Market was a must-try. And since it was located directly across the street from our hostel, it seemed like an easy choice. Sadly, I didn't get a chance to go over until after Liney had already left for the airport, so I had to go it alone and sit at the bar area.

Not that that was a bad thing. The bartender was a hilarious guy, and he was just the right amount of attentive. When I was clearly into the book I was reading, he left me alone, but if I was paying attention to the restaurant around me, he was there to joke or offer suggestions.

Since it was my first (and only) rainy day in Seattle, I had to go with a cup of soup. The Carrot Chipotle Puree, served with a drizzle of olive oil, was smooth and creamy, and the chipotle added just enough spice to offset the sweetness of the carrot. It was so simple and delicious that it made me feel like I could throw this together at home with no effort... but I know if I tried, my kitchen would end up a massacre of carrot mess. 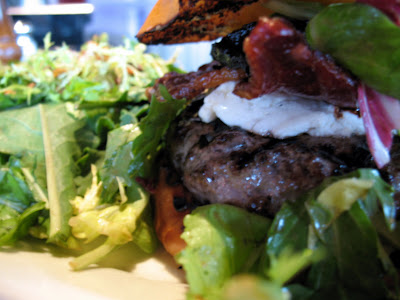 And for my meal, I was having a hard time deciding between the lamb burger and the special of the day, a pork sandwich. The bartender steered me towards the burger, saying it was their most popular sandwich. So I trusted his opinion, and man, am I glad I did. This is what a burger should be - juicy meat and toppings that accent the burger but taste delicious on their own. Every part was great on its own, but together, they packed a real punch. The bacon was perfectly cooked so that its crispiness would compliment the chew of the burger. The goat cheese was just sharp enough that it wasn't lost, but it certainly didn't overpower. The onions added a hint of sweetness, and the herb aioli countered with a savory bite.

If I do make it back to Seattle any time soon, I would definitely hit Matt's in the Market again. The view, overlooking the Pike Street market sign, is beautiful, and is a nice respite from the hussle and bustle below.