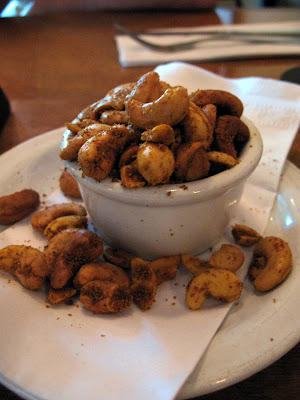 Another great meal from my recent Seattle trip was at the Hilltop Ale House in Queen Anne. It was, in fact, Liney's favorite meal of the trip, and it's high up on my list as well. Liney's friend Katie showed us around her neighborhood and thought we might appreciate trying one of her favorite restaurants.

First thing I did was make it apparent that I was from out of town. I ordered a Taunton Blackthorn Cider (delicious, by the way), but on the little list on the table, it was only listed as Taunton cider. When I tried to order, though, I only got a blank look. It took me a minute to realized that pronouncing the name like the similar town in Massachusetts was not going to get me a what I wanted, so I used my best TV Newscaster voice to order a second time, and that cleared it all up.

OK, on to the food. I ordered some curried cashews to snack on while we chatted and enjoyed our drinks. The cashews were delicious and satisfying, and the bowl was huge for only a couple of dollars. The curry was a bit strong on some bites, further proving that these were house-made. I think we (and by we, I mean mostly me) ate only about half the nuts before our meals arrived. 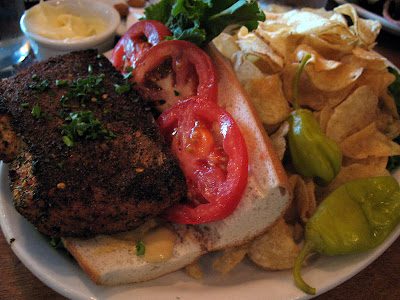 For my main meal, I had the blackened salmon sandwich. The seasoning on the fish was just spicy enough to set my lips tingling, but not so spicy that I couldn't really enjoy the taste. The bread, dijon mayo, and veggies were all good, but the salmon was truly the highlight of the dish. It was served with more potato chips than one person could eat.

Liney and Katie both enjoyed the baked goat cheese salad, with warm breaded goat cheese atop a huge pile of mixed lettuce, pecans, and red onions. It looked fantastic, and to see the two of them devouring them so intently, it must have tasted just as good.

Hilltop Ale House is just the kind of local, homey gastropub that makes a neighborhood feel like home. I'm really glad we got to try this less-touristy taste of Seattle.