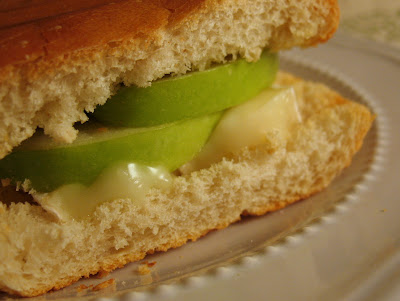 A few weeks ago, I received an email from Ile de France, offering me the chance to try some of their brie. I don't think it would have been possible for me to say no, since brie is my favorite cheese. My favorite brie is the Brie de Lyon at Wasik's in Wellesley, but I'm rarely over there to purchase some.

The Ile de France brie was tasty and creamy, albeit on the mild side. I like brie with a little more bite on crackers, but this seemed like it would mix well with other flavors. I opted for a brie and green apple sandwich, which can be thrown together in minutes but tastes sophisticated and unusual. I used my George Foreman Grill as a panini press (it always does a great job), but if you don't have a George or a regular panini press, you can always make this on toasted bread.

Slice bread in half, lengthwise, and place on the hot panini press while you cut the other ingredients. Remove from heat, and layer brie across the bottom slice. Layer apple on top of the brie, then drizzle with honey before topping with the top slice of bread. Place back onto panini press and toasted until cheese is melty and bread is golden. Serve immediately.
Posted by Pam at 4:46 PM

yummy, i haven't busted into my wheel yet, but can't wait :)

I usually pair apples with cheddar on sandwiches (I ate a lot of apple-cheddar sandwiches in college when I couldn't face the dining hall's offerings), but I could get behind apples with brie.

Now I'm thinking about getting a George Foreman grill. I see them at Goodwill every so often...

Apple and cheddar, oh what a delectable pairing! Can't wait to try one of these.

Simple is definitely the word. I love apples and cheddar too, but the creaminess of the brie takes the pairing to a whole different level.

I only get to this site here and there but when I do I always think I need to read it more b/c I love it!
thanks!