Taste of the Nation Boston 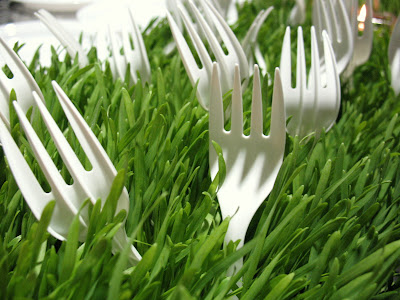 Share Our Strength is a national organization that focuses on fighting childhood hunger in America. They make sure that children get the food they need by providing access to and education about federal and other programs. Considering the current economic climate, there are about 12 million children in the US - that's one in six! - who are at risk of hunger. One way that they are able to do this is through a number of fundraising events throughout the year - delicious for people who attend, and immensely helpful for the children who benefit.

The Taste of the Nation events, held in 42 cities throughout the spring and summer, are a great way to get involved while enjoying an amazing night of food and drinks. The Boston event was held on April 2nd at the Hynes Convention Center, and man was it a great night. About 70 local restaurants and 40 wineries filled up the big hall, and the place was packed with people, enjoying all the great stuff. A great local band, Cassavettes, played all night - I recognized one of the songs at one point, spun around, and said to my friend "I know them! I have this song on my computer!" Overall, great food, drinks, and atmosphere equaled a really great event.

By the way, Taste of the Nation Worcester is coming up at the end of the month - April 27. If it's anything like the Boston event, it'll be amazing.

Can't attend a dinner but still want to help? You can donate through the Share Our Strength website. I really like that this is a cause that a lot of chefs (and food writers) get behind - Michael Ruhlman announced today that donations made through his site will enter donors into a contest for his newest book. 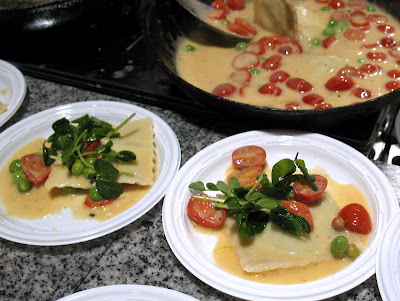 My friend Ann, who I've recently managed to pull into this crazy world of blogging, and I spent the evening trying as many things as possible. Some of my favorites:

Vermont Butter and Cheese Company (which has one of the most delicious URLs, by the way) - The fresh Crottin and the aged Bijou are brie-like and very tasty. The Crottin is more mild and would be a great place for people who think they don't like goat cheese to start. And the butter? Oh, yeah. With 86% butterfat (versus the mandated 80% minimum in most commercial butters), this stuff is just fantastic - I think I'll pick some up for the next time I make croissants.

Masa, which has great tapas deals, featured duck empanadas with a chocolate barbecue sauce. The ratio of filling to dough was perfect. They also served their chipotle tamarind margarita, which is not exactly my cup of tea, but very well mixed.

Davio's, which served a lovely spring pea ravioli (pictured above). Davio's always does pasta exquisitely, and this was no different. The pea filling was sweet and almost creamy, and the peas in the sauce were absolutely fresh and still a bit crisp. They also had a great display of white plastic forks standing at attention in a sea of grass (at the top of this post).

ChocoLee, an amazing little chocolate shop in the South End, was in the VIP room and served a variety of chocolates. She ran out by the end of the night, not so surprisingly.

Gargoyles on the Square served an odd truffle soup topped with potato puree and beet pollen. I hate truffles, but I couldn't stop eating this. The dish was meaty and unctuous and... wow. I've been meaning to try Gargoyles for ages, and this might just be the kick in the pants to get me there.

The Dining Alternative, which served peanut noodles. I'll admit, because they were served in little take-out boxes, I went back and grabbed a second helping for lunch the next day. Hey, I'm a grad student, what do you want? I've eaten a lot of peanut noodles in my time, and this was a great rendition of the dish. From what my friend Richard says, Peter Ungar (the chef of this catering company) is definitely one to watch.

The Lobby served duck quesadillas and a creamy butternut soup. We were very full by the time we reached this booth, but we knew from the first bite that the food was excellent. I had never heard of this place before (I can't even find it on Chowhound), but I have a good feeling that we'll be back.

Bombay Sapphire Gin - Besides all the wine, Bombay had a couple of booths (one in the regular area, and one in the VIP section) that were keeping people going. I've always enjoyed gin, although it's not my first choice of libations, but even Ann, who is not a gin girl at all, kept going back for more. Luckily, they handed out recipe cards, because the Tom Collins and Sapphire Royales that they were mixing will need to be replicated at home.

My one nit-pick about the event is (this is going to sound crazy) that there was too much food. I don't mean choices - I loved being able to try so many different things. I mean the size of portions. For an event sponsoring hunger, a huge amount of food was wasted. I much preferred the restaurants who kept their portions to one or two bites - I can go back for more if I like it!
Posted by Pam at 1:30 PM

Your pictures are great.

It was so good to see you!

It was such a great/fun event! Thanks for the recap.

Just so you know, at the end of the event, all the left-over food is donated to the food - bank... I think it's "Second Helpings" but can't remember the name. But I agree, the portions are too big, and I can't always finish my small tasting bites.

Good to see you too, Susan!

Julia, I figured they did that with what was left at the end of the night. But I hate throwing away food, and to be able to try everything, I have to throw away some...