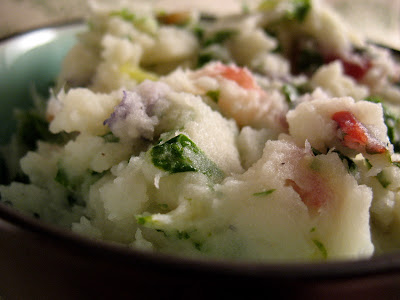 It's funny, but I feel like every Bostonian has a little bit o' Irish in them, regardless (or should I say irregardless?) of their actual heritage. Everyone celebrates St. Patrick's Day (to some degree), and Danny Boy seemed to make an appearance every year in my school choir's repertoire. And when I went to Ireland, I shouldn't have been so surprised to see badges from police and fire departments from almost every Massachusetts town hanging on the walls of the pubs I visited.

Which is why, every St. Patrick's Day, I find myself longing for a good ol' Irish meal. I've been craving corned beef for days, but I've had no time to cook it. I decided to go with the quick and easy dish of colcannon instead, just so St. Paddy's wouldn't go by without a heaping of root veggies.

Colcannon is basically mashed potatoes with cabbage or kale. My version is a little fancier, with parsnips and rainbow chard in the mix. For a more traditional version, trade out the parsnips for one more potato and the chard for kale or cabbage. It is also traditionally served on Halloween, with a coin or ring buried somewhere in the mix, but really, it's good at any time throughout the winter months, when you need a hearty side dish.

In a large pot with salted, boiling water, cook potatoes and parsnips for 10-15 minutes, or until tender. Strain with a slotted spoon and place in a large bowl; put pot back on the pot and bring back to a boil. Add leek and chard to the boiling water and cook for about 5 minutes, or until the chard stalks are cooked through. While greens are cooking, add butter and milk to potatoes, and mash until the potatoes are creamy. Drain greens and rinse with cold water; squeeze dry before adding to mashed potatoes. Stir to combine, and add salt and pepper to taste.
Posted by Pam at 1:05 AM

My contribution for St. Patrick's Day will be a crabby, cantankerous post about green beer.

What a great idea! In Ireland they even had nettles to champ! Yummy!:)

Yum! Yours look way tastier than ours did. I like the color addition!

Adele, you? Cantankerous? I think you need to talk to Liney below - I seem to be collecting friends in (or finally done with) law school ;)

Ulla, it's called champ if it's made with anything other than cabbage, correct? Nettles would be perfect!

Liney, I'm sure yours tasted fantastic - you know your potatoes!