I've already mentioned my love of Girl Scout cookies. When I saw the announcement for the Cookie Creations event from my local Girl Scout council, I asked my friend Mel to join me for the evening. Mel and I were G-Scouts (as she calls it) together for 12 years - that's a lot of cookies!

The theme of the event - Cookie Creations - was desserts inspired by and using Girl Scout cookies. Eight chefs from local restaurants participated, creating their own confections by using GS cookies as an ingredient. I've done this myself from time to time, but the best I ever got was crushing up Thin Mints and adding to Rice Krispie Treats (awesome, by the way, and worth trying out!). I couldn't wait to see what the chefs would prepare.

When we arrived, the place was already packed. Leave it up to the Girl Scouts to be punctual. The room was lined with tables for each chef and their cookie creation, and the crowds around each table were thick. In the order that we tried them: 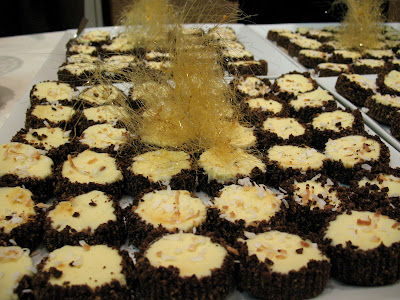 Chef Peppino from DaVinci Ristorante created a Mint Caramel Cheesecake, featuring Thin Mints and Caramel deLites. There was a lot going on, what with the mint, caramel, and coconut, but the ratio of crust to cheese was good (and I'm not even a fan of cheesecake). 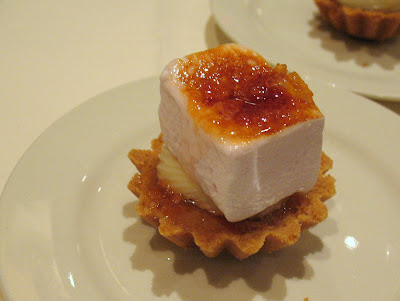 Chef Morris from Old Town Bread created a White Chocolate and Pink Grapefruit Tart, featuring Shortbread (Trefoils if you're old school, or your council still uses Little Brownie Bakers). It was delicious, if somewhat difficult to eat - the pink grapefruit marshmallow really towered over the rest of the dish. Most shortbread cookies work excellently as the base for a tart, and this was a good example of that use. I might try making just these marshmallows some time... 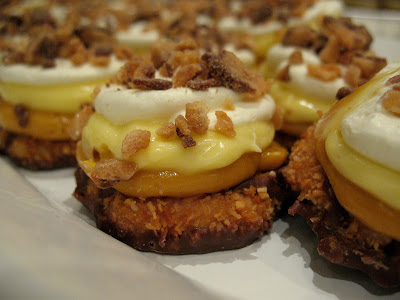 Chef Personius from Burtons Grill created the Triple Decker Caramel DeLite, featuring Caramel deLites and Daisy Go Rounds. It was basically a Caramel deLite topped with butterscotch and vanilla puddings and whip cream, making it very messy to eat. It would have, however, been excellent as a trifle, with the Caramel deLites chopped up a bit. 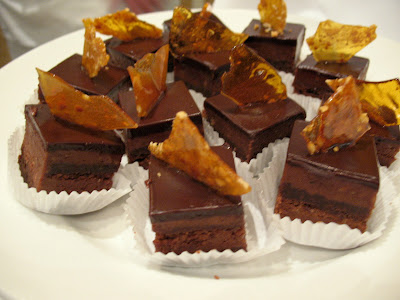 Chef Woodfine from Troquet created a Peanut Butter Crunch Torte, featuring Peanut Butter Sandwiches. The peanut mousse (sandwiched between fudge and ganache) was so creamy that it was hard to tell there were any cookies in there at all. This was decadent to be sure, but it was the only one I could see myself enjoying a whole plate of at the end of a meal. 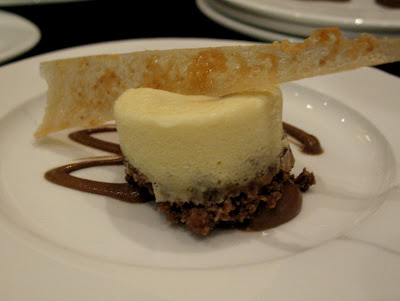 Chef Percoco from BOKX 109 American Prime created a Thanks-a-Lot Butterscotch Cheese Cake with Thin Mint Sauce, featuring Thanks-A-Lots and Thin Mints. I wanted to like this, but I found the Thin Mint sauce to be wicked overpowering, which, when combined with the texture of the cheesecake, had me thinking of toothpaste. Separately, I'm sure each part was very tasty. 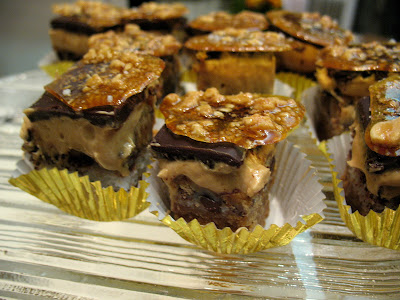 Chef Kilpatrick from Sofra Bakery and Oleana created Peanut Butter Parfait Bars, featuring Peanut Butter Sandwiches and Peanut Butter Patties. Yum! These were topped with a piece of salted peanut brittle, which provided something that many desserts are missing - salt! And I appreciated that she used both types of peanut butter cookies in the preparation.

Also featured, although I got no picture because it was pretty melty, was a Caramel deLite and Shortbread Gelato Sandwich from Chef Marini from Olivadi. It was a very simple preparation, with crumbled shortbread as a base, a scoop of caramel gelato in the middle, and a whole Caramel deLite on top. Tasty, but very messy.

Also also featured, again with no picture (this time just because I was getting jostled around and couldn't pull the camera out), was a Key Lime Yogurt Tart from Chef Hooper at Great Bay, featuring Daisy Go Rounds. Again, I'm not a fan of cheesecake, and also not a fan of Greek yogurt (I hate the way yogurt tastes), so this one was clearly not for me, but Mel seemed to enjoy it.

After everyone had a chance to taste the confections, voting began. There were three judges for an "official" winner, but attendees were encouraged to vote for the crowd favorite. Mel and I both gave our votes to Troquet's Peanut Butter Crunch Torte, but I had a hard time deciding between that and Sofra's Peanut Butter Parfait Bars. This is especially surprising to me because, while I enjoy peanut butter desserts, I tend to prefer mint - but the Thin Mint offerings just didn't wow me. I was really surprised to find out that the actual winners were Olivadi's Gelato Sandwich (judge's choice) and Great Bay's Key Lime Yogurt Tart (people's choice) - neither of my favorites won!

Have you made your own Girl Scout cookie-inspired desserts?
Posted by Pam at 11:10 AM