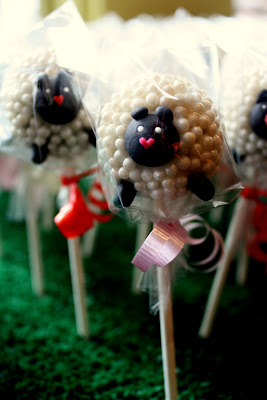 Last February, I was beyond thrilled to be a judge at the 2011 Lamb Jam in Boston. In fact, I found myself talking about Chef Jason Santos' winning dish to anyone who would listen for weeks on end. Little did I know that I would see him compete at the Lamb Jam Masters months later.

But as I was planning a weekend trip to New York with my parents (yes, we saw two shows, and we visited more museums than I could count), I realized that the Lamb Jam Masters was being held in New York that same weekend. Kismet, right? How could we not attend? The three of us ended up meeting my cousin who lives in NYC for a leisurely afternoon of stuffing our faces with lamb and drinking more wine, cider, and bourbon than we should (and yet we still went out for rice pudding after). (In planning the day, I made the stupid mistake of asking my cousin if she liked lamb. Hello? We're Armenian. Lamb runs through our veins.) 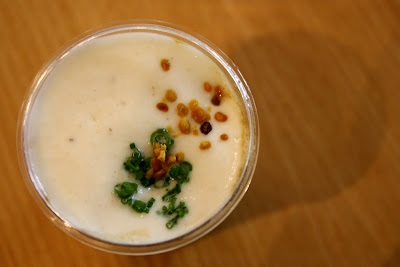 My family was, quite naturally, rooting for Chef Santos (late of Gargoyles on the Square, now of Blue Inc) to win. I told him before the event that I had come from Boston to see him bring the trophy home. He presented his poached lamb shank with black truffle, cauliflower espuma, bee pollen, and fried garlic (above) with aplomb (it was still my favorite dish, despite the local ties). It's just such a different dish than the others presented (and frankly from most lamb dishes out there) that it stood apart from the others. I guess too far apart for the others in attendance - Santos left without a prize.

The other also-ran was Chef John Chritchley of Urbana in Washington, DC. His dish of slow-cooked lamb leg with preserved lemon over a bed of white polenta was missing something for me that I just couldn't place (maybe I had had too many bourbon and Coke slushies by then?).

The People's Choice award went to Chef Mark Bodinet of Copperleaf Restaurant in Seattle. He made a lamb shoulder confit with creamy parnips and a huckleberry sauce, and this dish was my second favorite of the day. I couldn't get over how tender the meat was, and I just loved the sauce.

Finally, the award of Lamb Jam Master went to Chef Adam Mali of MarketBar in San Francisco. He served up a braised lamb shank with cannelini beans and a lavender-mint gremolata. The gremolata was my favorite part of the dish, but then, I always love floral notes in my food. The meat was perfectly cooked and tender, but I found the white beans fine and the accompanying broth unnecessary.

(See pictures of all the dishes and more here.)

And while those four dishes were the stars of the afternoon, there was a lot more going on. Dickson's Farmstand offered up lamb sausage and pastrami (for which my cousin probably went back for fourths or fifths) as well as a kick-ass butchery demo. Pera Mediterranean Brasserie served up lamb kebabs wrapped in lavash (the idea for which I'm sure my mother is going to steal for future dinner parties). The Meatball Shop had fantastic lamb meatballs with pesto and a corn salad (using the last of the season's corn) that I absolutely adored. Little Cakes made adorable lamb cake pops for everyone (although my father thought the pop part was kind of gross and just tore off the outside for the cake inside - I didn't tell him it was gluten-free). There was lots of wine and beer to be had as well, but since I don't drink beer and wine just makes me sleepy, I stayed away. Luckily, there was plenty of cider from Foggy Ridge Cider (my new favorite!) and bourbon from Jefferson's to keep me happy. Overall, even though Boston didn't bring home the crown, the Lamb Jam Masters was a great event. Thanks to the American Lamb Board for putting together yet another amazing event!

Full Disclosure note: My ticket to the event was given to me for free by the American Lamb Board. My parents paid for theirs, though.
Posted by Pam at 11:46 AM

oh gosh, so envious that you got to eat Santos' poached lamb again. That was one of my favorites last year!