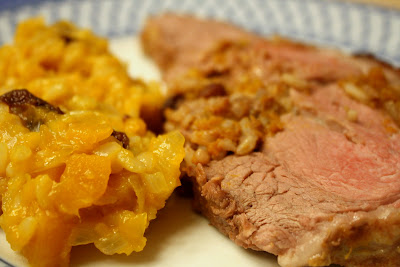 When Armenians say meat, they really mean lamb, and I can hardly think of a gathering of Armenians beyond my immediate family that hasn’t include at least one type of lamb dish. So when I was invited to participate in the inaugural Lamb Pro-Am, sponsored by the American Lamb Board and BostonChefs, I knew I would make an Armenian-inspired dish almost as quickly as I knew I would participate.

I was surprised at how fast I came up with a recipe for this challenge. We (me and 9 other Boston-area bloggers) were tasked with cooking a boneless leg, which ruled out any stew-like dish because there are better cuts for that. Immediately I thought of shish kebab – skewers of lamb (usually leg), marinated and grilled. But it was too simple (not to mention that Fall seems to have finally settled upon us with drizzly day after drizzly day). And then I remembered an often-talked-about dish that my grandmother used to make, and I KNEW.

My father’s mother passed away when I was very young, so I never got to experience her cooking, although my life has been filled with stories about her ruling over her kitchen. I spent a weekend this past summer with my horkur (Armenian for aunt, more specifically father’s sister), and after we baked treats that she remembered from her childhood, she gave me a copy of a cookbook she had written, which included many of her mother’s recipes. 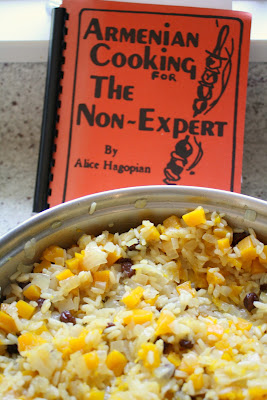 One recipe jumped out at me. It consists of rice and pumpkin and onion and raisins, and that’s pretty much it. I had wanted to try it since hearing about it years before, and I knew that my other grandmother had made a similar dish, so it couldn’t be bad if both sides of my family had their own versions. But instead of just serving the pumpkin rice alongside the lamb, I decided to fill the lamb with it.

The rice was surprisingly quick and easy to put together. The only hardship is the chopping of the pumpkin and the onions. I know 3 onions sounds like a lot, but light a candle and get chopping – you really do need 3 onions. Trust me. And because I was planning on putting the rice inside the lamb, I diced the pumpkin up into small cubes; if you serve it just as a side dish, you can cut bigger cubes. Use any kind of pumpkin or winter squash you’d like (I used my favorite, buttercup squash). This can be made a day ahead if need be.

In a large pan, heat olive oil over medium heat. Add onions and cook until translucent, stirring often. Add rice, raisins, salt, and sugar, and stir to combine. Push mixture to one side of pan and lay down about a quarter of the diced pumpkin; move rice over the pumpkin and lay down another quarter on the other half of the pan. Even the rice out, then top with the remaining pumpkin. Add water, cover, and reduce heat to low. Let cook until rice and pumpkin are cooked through and tender, about half an hour. Stir together before using or serving.

Now, I’m no butcher. Butchers are trained and know what they’re doing with a cut of meat. Me, I just kind of hack at meat until it looks good enough. I lamely attempted to butterfly my leg of lamb, making sure to cut out the silverskin to ensure a tender roast. I definitely could have done a better job, but I also didn’t ruin the meat (whew!). If you give this recipe a shot (and don’t know what you’re doing, much like me), ask your butcher to butterfly the leg for you. You’ll be much happier.

Once the leg is butterflied, lay it meat side up (fat side down), sprinkle with a little salt, and lay some of the rice mixture evenly over it. There will be plenty of rice left – save it to serve with the meat later. Roll the meat up, trying not to squeeze out all the filling as you go, and tie it together to keep its shape (I found this video helpful, although it was more of a two-person job for me). Place it fat side up in a roasting pan and cook in a 350° oven until a thermometer inserted into the meat (make sure you avoid the rice filling!) reads 150°. Remove from oven, cover with foil, and let stand 10-15 minutes before cutting and serving. Reheat the rest of the rice to serve alongside – the pumpkin will mush a bit as you stir, making it appear more orange than it had before. The rice inside is a bit meaty and has imparted much of its sweetness to the meat, while the rest of the rice has a more pronounced pumpkin flavor, so it almost seems like two different rice dishes. 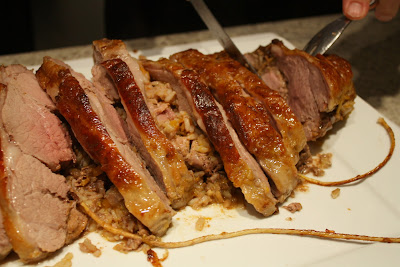 The rice got plenty of approval from my parents, who said it tasted just like they remembered, and the three of us devoured more lamb than we thought possible. Hopefully my grandmother would have approved as well.

Many thanks to the American Lamb Board and Boston Chefs, who provided me with this wonderful cut of meat. Please take a moment to vote for me here - the top four bloggers move on to the next round!
Posted by Pam at 2:19 PM

I love it when you post Armenian dishes! The lamb looks great!

I got all misty thinking of your parents' approval and your horkur's and grandmother's recipe! What a perfect dish for this beautiful roast.

Great photos. The lamb looks so juicy. That first plated photo has a nice depth of field. Yum.

Pam, this looks (and sounds) incredible. Love seeing what you did with the lamb challenge! And I bet that cookbook by your aunt is an incredible resource...

Thanks so much to all of you! I appreciate the kind words.

What a perfect fall dish! I think it is so great you have your aunt's cookbook for inspiration and family to share this dish with. Great post!

Good luck, and thanks for teaching me a new recipe ... and a new Armenian word! :)

you go Pam! We are all behind you (with our forks!)
(hey you there, put that catsup away!)