Getting Corn Off the Cob 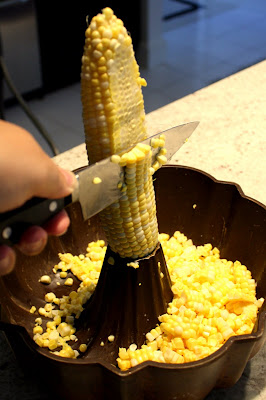 I love my corn on the cob, especially when it's at its sweetest at this time of year. But as I do with anything that is only ripe for a few short weeks, I like to work it into as many dishes as possible, which means needing to take it off the cob. I used to stand the cob up in a deep bowl and cut down the sides, but it was an awkward cutting position. There are also tons of gadgets out there that will get this done, but who needs more gadgets? I'm not sure where I first saw this bundt pan tip, but it's been making a world of difference for me this summer.

Just stand the shucked corn cob upright in the middle of the bundt pan (if the pan is nonstick, you can use a paper towel to protect the finish) and cut down the sides to free the corn. Rotate as you go, and if you can't get the last few rows, just flip the cob upside down at the end to cut them off. If you cut slowly, the kernels will fall right into the pan (cut fast and they'll end up all over the kitchen instead).

If you need something to do with your freshly cut corn, you could follow my example and make corn and scallion chowder.
Posted by Pam at 12:58 PM

That is a fantastic tip.

You're like MacGyer! :-) We use an Oxo corn-stripping gadget because I adore gadgets :-)

This is genius. You have no idea how close to finger-less I came this summer! thank you!