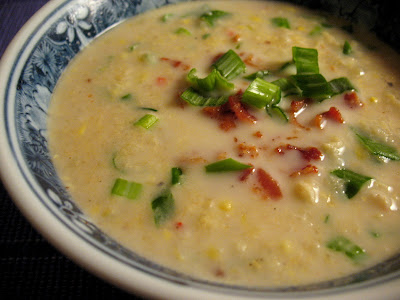 I love corn soups, but I don't have the best track record in making them. So it was with some hesitance that I decided to try a corn chowder from Fine Cooking magazine with what will probably be my last farmers market corn of the year.

I am very glad that I made this soup, though. It was just what I was looking for - creamy, sweet, salty, warm, and comforting - and will undoubtedly secure a place in my repertoire now. The scallions were a surprising ingredient for a soup, but I was really happy with the mild onion flavor, as well as the texture, that they added. I'm sure this chowder would be good without the bacon (I promised my roommate I'd make some bacon-free for him sometime) if that's your style.

Clean the corn and cut the kernels from the cobs. Reserve two cobs and discard the rest. Finely slice the scallions, keeping the dark green slices separate from the white and light green slices.

In a deep pot over medium heat, cook bacon until crispy and brown. Remove the bacon pieces from the pot and cool on a paper towel. Drain off the bacon fat, discarding all but 1 Tbsp. Return the pan to medium heat and add the butter to the 1 Tbsp bacon fat. When the butter has melted, add the jalapeno, a pinch of salt and pepper, and the white and light green scallion slices. Stir until the scallions are soft, about 3 minutes.

Add the broth, corn, corn cobs, and potato, and bring to a boil over medium-high heat. Reduce heat to medium-low and simmer until the potatoes are tender, about 15 minutes. Remove and discard the corn cobs.

With an immersion blender, blend the soup for about 30 seconds, just until it begins to look creamy - you want plenty of chunks left. Alternatively, transfer about 1 cup to a blender and puree before adding back to the rest of the soup. Add the cream and 2/3 of the dark green scallions, and stir until the scallions are wilted. Serve topped with the remaining dark green scallions and the crumbled bacon.
Posted by Pam at 4:10 PM

I am about 100% positive that this soup would cure me once and for all!

I just made this. It was very good! I pureedfla 2 cups of the chowder and added a little more cream. I used my own homemade chicken stock. It was so good with all the sweet white summer corn!

Alternate version. I'm also a Lexington local so i have to suggest that people use the fresh native Wilson's Farm Corn and beautiful scallions (low spray IPM). Instead of the Jalapeno i put in some Ancho pepper (AKA Smoked Poblano).. much more complex smoke and chili notes. I used about 2 Tablespoons. Enjoy!