Besides our amazing dinner at Blue Moon Bistro, we managed to explore a little more of the Cape on our vacation. Some of the highlights: 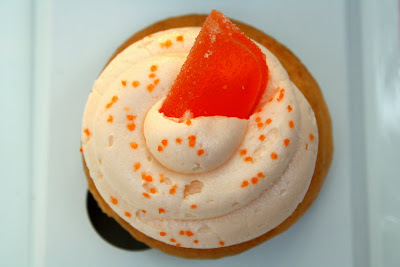 Cupcakes from Cupcake Charlie's in Mashpee - While doing a little browsing at Mashpee Commons (my favorite store there is Maiden Voyage, which sells all sorts of mermaid themed items), we picked up a few cupcakes to eat later in the day. We picked the Chocolate Mint Madness (chocolate cake with mint buttercream) and the Orange Dreamsicle (orange zest cake with orange buttercream). The buttercream frosting is damn near perfect - creamy and smooth without being too buttery or too sweet. The orange zest cake was also excellent - moist, not too crumbly, and with plenty of orange flavor. The chocolate cake was a bit off to me - it had that weird aftertaste you get from too much baking powder or soda. But that orange cupcake - just heavenly. 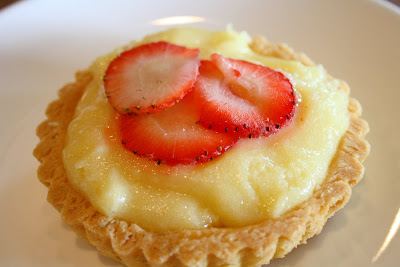 Pain d'Avignon in Hyannis - We found Pain d'Avignon last year while exploring and have been waiting all winter to get back. It's a bit out of the way - you have to look for a sign that says "bakery" but doesn't have the shop's name - but so worth looking for. Since we went last year, the space has expanded from a storefront with a few tables to a much larger space with plenty of room to sit. We shared a turkey and brie sandwich and a croque monsieur, then a lemon tart with strawberries. But the real winner at Pain d'Avignon is their bread. They make some of the best bread around, stuff so good that it reminds me of Paris. 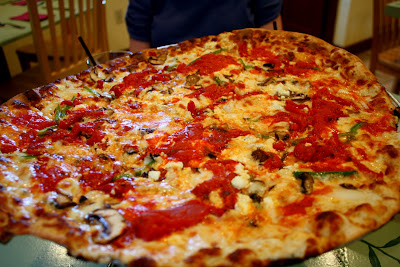 Pizza at Mezza in Falmouth - My parents had eaten at Mezza for dinner one night and enjoyed it, but they wanted to try the pizza sometime. So we stopped in for lunch on a weekday and were practically the only people there. I hope business picks up for this new restaurant because it has a unique concept (Armenian-Italian) and very tasty food. The baba ganoush ("Barber Ganoush" on the menu because the owners' last name is Barber) was delicious - different than typical because of goat cheese added to the mix. And while this picture of the pizza (Mezza Mix - mixed veggies with goat cheese and mozzarella) is pretty hideous, the pizza itself was fantastic. The crust was super thin and cracker-crispy, and the toppings were spread out evenly - a must with such a thin crust. Oh, and the pizza was HUGE - one was plenty for the three of us. I'd love to try more of their pizzas - guess I'll just have to visit again!