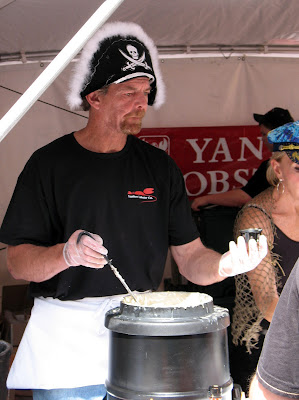 Man, Boston really lucked out this weekend. After a month of being seemingly transported to the Pacific Northwest (minus the great coffee shops), the sun finally showed up. I spent the 4th at a friend's house, where we all just sat on the lawn, enjoying the sun and eating the half-ton of food that was spread on the tables. My friend even made my coffee jello, horrifying the attendees but then winning them over with just how awesome it is.

With more sun on Sunday, it seemed like the perfect weather to take advantage of Chowderfest. I headed down to Government Center, where the plaza was packed with thousands of chowder fans. We bought our tickets, headed into the crowd, and started eating.

Overall, though, I was really disappointed with the offerings. We started at the Ned Devine's booth, and that remained the standard to which we measured all the others and was the clear winner (both in my mind and officially). Some of the other chowders were just ok, while others were downright inedible. 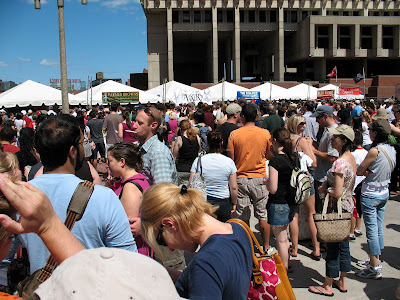 My thoughts on the competitors:

Ned Devine's - Creamy, with a dense (but not too dense) broth. The potatoes and clams were evenly and well cooked, especially the potatoes, which were tender but not falling apart. This chowder was also evenly spiced.

House of Blues - I literally spit this one out after my first bite contained a giant piece of clam that was tough as rubber. The red potatoes tasted like dirt, and the broth was water-thin. The awfulness of this chowder was independently verified by someone who overheard us talking about it.

Farmer Brown's - This chowder had very thick, almost pasty, broth, and while the clams were well cooked, they were filled with grit and totally off-putting.

Parkers - Want to drink a cup of cream? Then this chowder's for you. There were almost no chunks of anything in this, and it needed some seasoning and salt to taste like something.

The Algonquin Club - BACON! This had a nice thick, buttery broth, but the overwhelming taste was bacon. In fact, I dubbed this "bacon chowder." Very, very good, but not what I was looking for at all.

Beer Works - This chowder tasted very "New England." I'm not sure why, maybe it was the way the celery paired so well with the bacon, but I just kept thinking that this was what was meant by "New England" clam chowder. The broth was a little too thick, and the potatoes were a little undercooked, but I would definitely not mind eating a bowl of this.

Yankee Lobster Company - First of all, Yankee Lobster gets points for getting into the mood - all their servers were dressed like pirates or had crazy hats. Their chowder, however, was very odd, with a thick, weird texture akin to tapioca. It was more of a potato chowder than a clam chowder, but still was tasty, with lots of black pepper and celery. Not what I was looking for, but interesting.

With so many off-putting chowders, I feel like I need to make my own now, just to get a better taste in my mouth.

Did you go to the Chowderfest? What was your favorite?
Posted by Pam at 11:00 PM

I voted for Parker's, but yeah, it definitely needed more pepper or something. Tabasco helped!

House of Blues should stick to music.

But if you have to add something to it, it's not well seasoned. Although I did like the sample bottles of Cholula hot sauce they were giving out - they were a hefty size for samples!

Parker's continues to disappoint me - their Parker House Rolls and Boston Cream Pie (both of which they INVENTED) are horrible!

Aww it's too bad there weren't many fabulous chowders, considering we're in New England and all. I never would have thought Ned Devines made a good chowder, but then I've only been there on crazy Friday nights. Maybe I need to try their food out!