Herbed Corn from the Grill 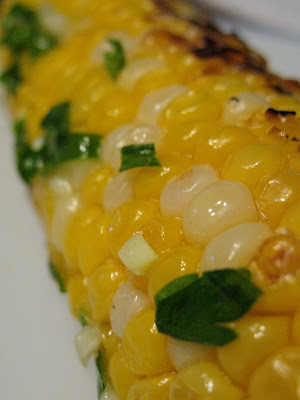 So Mother Nature decided to hold up her end of the bargain this weekend, and I in turn took to the grill. And with corn, one of my favorite foods, coming into season, grilled corn was a natural choice. (I also grilled some potatoes, which didn't work quite so well, but were tasty. But then, anything covered in cheese is tasty.)

And since it's still early in the season, I whipped up some herb butter to make the corn a little more interesting (in case it didn't end up very sweet, which was not a problem). The recipe below is enough for 6 ears of corn. I also used some on my potatoes, which added a lot of flavor, and really, this would be good on any veggie or meat fresh off the grill. Because, after all, it's butter.

Lightly brush corn with olive oil and place on a hot grill. Grill until slightly browned on all sides, turning as needed.

Combine softened butter, parsley, chives, garlic, lemon zest, and vinegar in a small bowl. Using a fork, mash all the ingredients together until well combined. If the butter gets too melted, place in the fridge until needed.

Spread the butter mixture on the hot corn and serve.
Posted by Pam at 9:02 PM

Corn is one of my favorite summer foods!