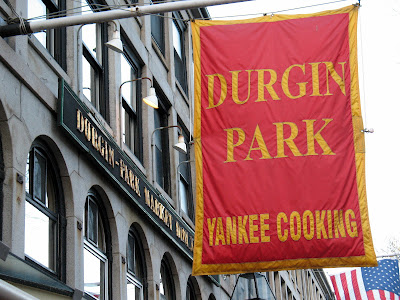 Last night, the wonderful Lily von Schtoop from Calamity Shazaam in the Kitchen and I embarked on a tour of our shared Yankee heritage, which we quickly dubbed the Ye Olde Boston Food Toure. (See Lily's report here.) It was like playing tourist in our own city (especially since most of our stops were pretty touristy). And despite having lived in Boston my whole life, I had only visited one of these restaurants before. For fun, we had Phyllis Meras' The Historic Shops & Restaurants of Boston along for reference, which we used to amuse ourselves (and our waitstaff). 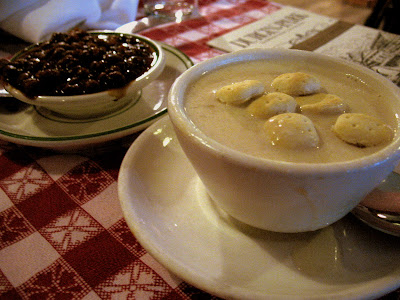 Our first stop was Durgin Park in Quincy Market. A mainstay of Yankee cooking, Durgin Park is known for surly waitresses and huge meals catered to tourists. Since this was just our first stop, we didn't go for a whole meal (although I have heard good things about the Prime Rib). Instead, we started with clam chowder, baked beans, and cornbread. The chowder was a lot like what I grew up with, with a thinner broth and extremely tender clams. The beans were surprisingly tasty (especially since I don't even like baked beans) - I doubt I could eat a whole bowl of them, but it was still good. The cornbread was a definite no - bland and uninteresting. 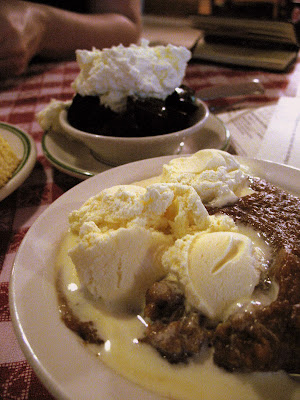 For dessert, we went for the Indian pudding and the coffee jello. The pudding was served piping hot with melty vanilla ice cream on top, and it was delicious. With all that molasses, it tasted like New England in the fall. And the coffee jello - we ordered this pretty much because it sounded so odd, and the serving we received definitely didn't disappoint. I dubbed it "astronaut coffee" because it was like a good ol' cup of coffee, only in solid form. The gelatin was very stiff with a strong, unsweetened coffee flavor, and it was topped with overly sweet, overly whipped cream. It was very odd, and yet, I couldn't stop myself from eating it. Gross and delicious at the same time.

Overall, Durgin Park offers better food than I thought it would, especially with the desserts. I doubt I'll be eating there regularly, but I wouldn't hesitate to take visitors there. 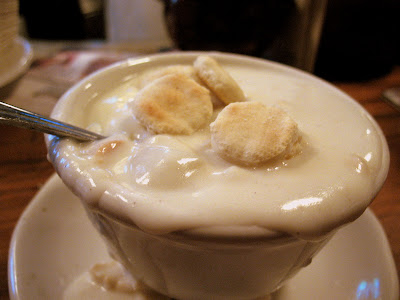 Next up was the Union Oyster House, where we sat at the semi-circular oyster bar for oysters and more chowder. My companion enjoyed her bivalves quite a bit (I'm not a fan, so I passed), but the chowder was delicious. It was quite different than that of Durgin Park - thicker and creamier, with more chunks of clams and potatoes. But while the chowder was very good, the atmosphere, with flies buzzing around, piles of oysters sitting around in slushy ice, and a bar that's not quite level, was... unique, to say the least. It was a little slice of Boston, with locals and tourists crammed in side-by-side, and we even caught a glimpse of Patriots linebacker Tedy Bruschi on his way in for dinner. 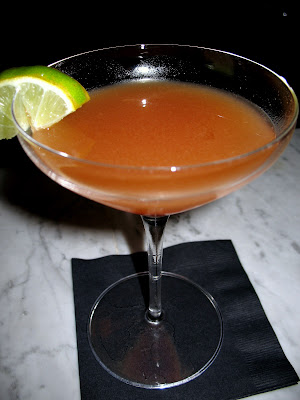 After all that chowder, we were ready for a little break. We wandered over to Cafe Marliave, the only restaurant of the bunch that I had been to before. The Marliave closed a few years ago after over 100 years of business, and it was just reopened about a month and a half ago by new owner, Scott Herrit (of Grotto, which I love). We sat at the bar and enjoyed a few cocktails. Keeping with our Ye Olde Theme, I opted for the Molasses Flood 1919 (Sailor Jerry's Rum, molasses, lime, and bitters) and the Boston Tea Party (tequila, Earl Grey tea, house-made ginger beer, and lemon). They were both very well mixed by Robbie, our great bartender, although I liked the Molasses Flood more (the Tea Party was sweeter than I was in the mood for). We also had a little sample of pumpkin apple soup, a delicious blend of fall in a cup. I'm eager to head back to try more of their food, which smelled amazing. 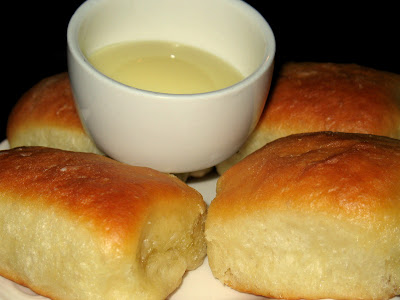 Our final stop for the night was at the Omni Parker House for their famous Parker House rolls and Boston Cream Pie (recipes for both can be found on the hotel's website). And while sitting in the bar, overlooking the old city hall across the street, on a cold evening was enjoyable, the food was less than spectacular. The rolls seemed like an imitation of what they should be - buttery with a hint of sweet, and soft with a slightly crispy crust. These specimens were, however, oily and dense and just not right. The Boston Cream Pie was another disappointment - the sponge cake and the pastry cream were both very good, but it was all ruined with a coating of limp, slivered almonds, an almost solid chocolate topping, and fake whipped cream. I know, I know, both of these items were invented at the Parker House, but they are so beloved in our fair city (especially the Boston Cream Pie, which is the official dessert of Massachusetts) that they pale in comparison to what can be had at other spots. 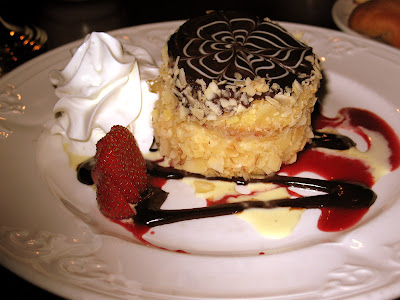 Our Ye Olde Boston Food Toure ended up being a fun adventure through (mostly) tourist-land. Durgin Park, the Union Oyster House, and the Parker House all have their places among the culinary history of Boston, and while they are often overlooked by us locals, they are sometimes the only places visitors stop to get a taste of local food. The Marliave only hints at its past, especially since it has been refigured for a more contemporary crowd, with gourmet comfort foods and terrific cocktails.

Any thoughts on where Lily and I should visit for our next Ye Olde Toure?

And did we both forget to include the word spodge in either post?

Well, neither of us discussed the object that was described with the word "spodge"... although I suppose the word would have applied to the whipped cream that came with the Boston cream pie...

The tour was a great idea! I've heard rumors of the coffee jello before, but have never tried it. I don't think I ever will. : )

I ate at the Parker House last night. I had the Boston Cream Pie as always. The cream was real, the cake was light and fluffy, the chocolate and almonds perfect. It may be hip to be critical of traditional (no-ethnic) foods, but its just plain dumb to put down well made fresh food. Would you put down mom's mac and cheese? No,because comfort food is in. By the way rolls made with white flour are really light and tasty, it is pretentious to pretend that only rustic whole grains taste good.

You're completely right, Pye. It is dumb to put down well-made food. If what I had eaten 4 years ago (do you realize how old this post is?) at the Parker House was any good, I would have said so. Maybe someone there realized they weren't putting out food that lived up to its'heritage?

(By the way, I didn't mention anything about whole grains being better. I like Parker House Rolls when made correctly. The ones I had were not made correctly.)