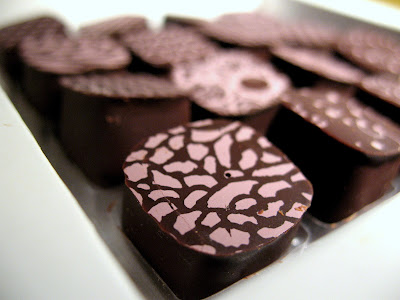 Not too long ago, I was wandering around the Copley Mall and stopped into the RichArt chocolate store. I've always passed this place by before, because I generally only use the Copley Mall as an indoor passageway between Copley Square and the Prudential Center (although occasionally, William-Sonoma or Banana Republic will entice me in). But on that day, I was feeling liberal with my money (I don't know why, I don't have any) and went in.

And fell for the sales pitch. Because the last thing I needed was a box of 20 gourmet chocolates. But I was really interested in how they break down the different flavors into seven categories. The sales woman walked me through the different categories of balsamic, roasted, fruity, citrus, herbal, floral, and spiced. They all sounded good, but I went with the florals, because I love rose-flavored foods.

The little booklet that comes in the box suggests sampling the chocolates in a particular order so that nothing gets overwhelmed. And I could see why after tasting just a few. The first, the Neroli Ganache, was light and only vaguely floral. The Wildflower Ganache was my least favorite of the bunch, overly lemony and almost antiseptic. Next was the Alpine Flower Ganache - I'm not sure which Alpine flower this was supposed to be, but again, it was only vaguely floral and not overpowering at all. The next two, Ylang Ylang Ganache and "Rosae" Geranium Ganache, were my favorites. The Ylang Ylang was bright in flavor, like tropical fruit, and almost tasted like banana, while the Rosae Geranium had a lovely, intense but not overwhelming rosey flavor. Next up was the Lavender, which had a very subtle lavender flavor and was not at all soapy, which can be a problem with lavender-flavored things. The last in the list was the Exotic Flower Coulis. Because it was a coulis and not a ganache, the filling all came out with the first bite, intensifying the flavor - I think it would have been more enjoyable if I hadn't gotten it all in one bite. As it was, the flavor was a little too perfumey for it to be enjoyable, although the flavor mellowed over time and became almost nutty by the end.

Now that I've tried 7 of the 49 different flavors, I'm intrigued to try the rest. Overall, the flavors were subtle, balanced, and well-done, not too in-your-face. There are a lot more unique choices (like basil) that really have me interested, so I may go back out of sheer curiosity. And I think the small boxes would make a great hostess gift, since they're under $25 and offer a variety of tastes.
Posted by Pam at 6:17 PM

their caramel chocolate bars are quite yummy too! and also cheaper :)