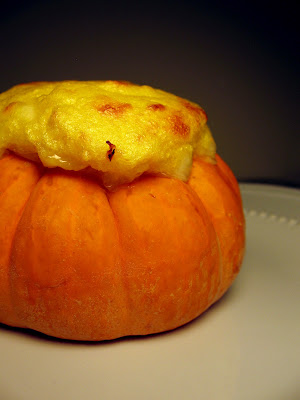 I'm not usually one to make recipes found in advertisements for brand-name products. But when I saw the ad for Cabot's Pumpkin and Habanero Cheddar Souffles in a magazine, I couldn't wait to give them a shot. Nothing says Fall quite like pumpkins, and these seemed like the perfect way to start the season. Luckily, I already had some of Cabot's 50% Light Jalapeno Cheddar at home, so all I had to do was pick up some mini pumpkins.

Before finding this recipe, I would never had thought to cook with mini pumpkins. We're talking about the tiny little things that can be found with the other small ornamental squashes. I didn't even consider how much flesh was actually in them. But each pumpkin has about half a cup of meat to it - good eats! And very easy to deal with!

Preheat oven to 350°. Place pumpkins in shallow baking dish and add water about halfway up the sides of the pumpkins. Cover tightly with foil and bake for 40 minutes. Let cool.

Reheat oven to 375°. With a paring knife, remove tops from pumpkins. Remove seeds and scoop out flesh, leaving about 1/4-inch-thick walls. Place pumpkin meat in a bowl. Add egg yolks, flour, baking powder, and cheese, and mix well. Whip egg whites into stiff peaks, then fold gently into the pumpkin mixture. Spoon mixture into the pumpkin shells. Place on baking sheet and bake for 12-15 minutes, or until puffed and starting to brown.
Posted by Pam at 8:19 PM

This sounds awesome, and not nearly as complicated as one might think cooking in a pumpkin would be.

Thoughts on other variations? Like maybe a smoked cheddar?

Never thought of using those kind of pumpkins, I will have to try this.

Hey, glad you liked the recipe -- thanks for the nice mention! I never knew little pumpkins could be used for cooking 'til I saw this, either!

I know, I always though those pumpkins were useless!

Jenny, I bet smoked cheddar would be tasty... so many variations to try now :)

Thanks for stopping by, Jen! I'll have to check out Cabot's blog, because I quite obviously like your cheese :)

Yes, but how did they taste? Did you like them?? Would you make them again?

P.S. Found your blog via Urbanspoon and love it!