I spent the week of my birthday on Cape Cod, which has become something of a tradition. On the weekends, we don't leave our neighborhood - it's not worth fighting the traffic - but during the week, we explore a bit afield. One day, we drove up 6A to the Cape Cod Museum of Art and a visit to my cousin's restaurant, Blue Moon Bistro.

Blue Moon Bistro has been open for a few years now, but I get to spend so little time down the Cape, I hadn't been able to stop by (although I have sent my blogging friends before). I'm glad we finally took the time, though, because it was an amazing meal that we're still talking about a couple of weeks later.

Note: My cousin Lisa usually does front of the house stuff, and her husband Peter is the chef, so I'm reviewing family here. But really, if I didn't like my meal, I just wouldn't write about it. While we were eating, the tables on both sides of us talked about how much they enjoyed the restaurant, and they were all repeat customers. 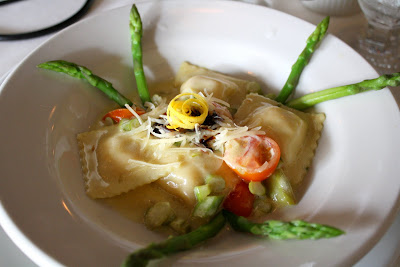 As we perused the menu, the bread basket was brought out. If I were to rank restaurants by how good their bread basket was (why don't I? This may be my new rating system), this would definitely be in the top five. Crispy breadsticks, crunchy cheese-topped crostini, and soft rosemary focaccia was served with a white bean dip and a duck liver pate with wine gelee. This and a cocktail alone would have equaled a pretty perfect dinner for me. But no, we made our choices and ordered our meals.

I started with a half order of lobster ravioli and would have eaten another whole order for my entree. I've ordered lobster ravioli at a lot of places, and I often find the actual lobster flavor lacking - not so here. I'm not sure what else was inside the pasta, but it tasted like lobster without anything getting in the way. It certainly didn't taste like filler. The pasta was lightly dressed in a lemony butter sauce that complimented the filling and that I sopped up with more bread.

My mother went with a goat cheese and beet salad, topped with candied walnuts, that she couldn't say enough good things about, and my dad ordered off the pre-theater menu, which is a great deal, and got a tomato soup. 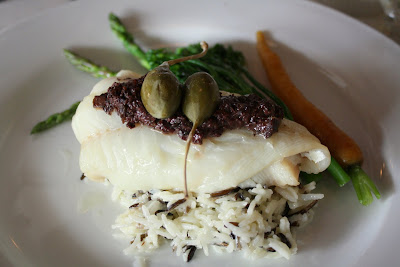 Since we were on the Cape and Peter focuses on local ingredients as much as possible, I figured fish would be a good bet. I went with the local haddock, topped with olive tapenade and giant capers, and served with veggies and risotto-style wild rice. The fish itself was mild, so the olives gave it an unctuousness that would otherwise be missing. The vegetables were perfectly cooked and still had some body to them, and the rice - oh the rice. I'm not a big fan of rice (ask my mother how many times I've made pilaf, like the good Armenian girl I should be), but apparently cook it risotto-style and I'm in love. I scraped the plate clean. (My parents went with the sea bass and the beef tenderloin, but I was a little too focused on my own meal to pay much attention to theirs.) 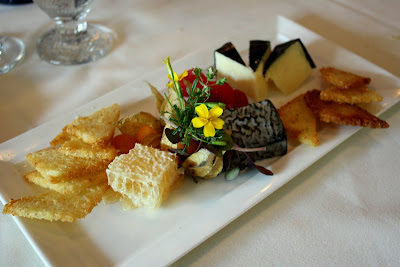 I had planned on ordering dessert even though I was getting pretty full, because hey, it was my birthday! My father's prix fixe meal came with two little chocolate tarts. But just as we were discussing dessert, Peter sent out a cheese plate for us. I don't usually think of cheese as a dessert (unless we're talking about Fiore di Nonno's fig burrata, which is totally a dessert), but this was completely satisfying. As with most of the meal, many of the ingredients were local. The aged cheddar (back) and the goat cheese (black rind next to the flowers) were not too challenging, as cheeses go, but were just perfect. I loved the gooseberries (still in their husks) and the honeycomb that served as garnishes. This cheese plate was a main topic of conversation for two days after this meal. I don't know if there is normally a cheese plate on the menu, but there should be - the presentation was gorgeous and allowed the local ingredients to shine.

If Blue Moon Bistro were in Boston, they'd be getting their fair share of buzz, especially in the use of local ingredients and work with local farms, but the food scene on the Cape is much quieter. If you find yourself mid-Cape anytime (they're open year round), definitely make a stop for dinner.

That cheese plate looks fabulous! I'm heading to the Cape next weekend, so if I have a chance, I'll try to stop in here. Happy belated birthday!

I definitely think a restaurant's bread basket says a lot about the eatery - if the bread isn't good, I'm not going to want to eat anything else. Happy belated birthday, btw!