Where To Eat Magazine's Taste of Lucca

I love trying new restaurants, but it can be hard to get a good idea of what they offer from only a dish or two. Tasting menus can be a great way around this, but they're usually a little too expensive for me. Enter Where To Eat's 10th Anniversary dinners. The magazine, which publishes restaurant information for casual dinners and insiders alike, has been celebrating 10 years in print by hosting "A Taste Of" dinners, featuring a different restaurant each month. These dinners have been going on since September, but you still have four more months to jump on the train. They are held on the first Tuesday of every month until July, and people who make their reservation early are able to attend the cocktail hour beforehand. They've already had dinners at Radius, Gaslight, Masa, and Upstairs on the Square... and now Lucca in the Back Bay. 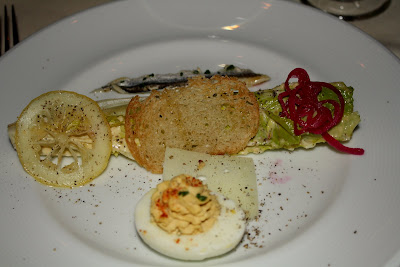 These special dinners are built around three tastes of three courses. The other restaurants have served all three tastes on one plate, as if they were a regular course, but the chef at Lucca chose to serve each item separately, which made the meal longer but also a touch more formal.

Our appetizers started with an Island Creek oyster topped with bacon, lemon, and truffle oil. The flavors were remarkably balanced - truffle oil can be delicate, but it held its own here. We moved on to the Insalata alla Romana (above), which was basically a deconstructed Caesar salad. I especially loved the pickled shallots and slice of lemon (I don't have it in my notes - was it preserved lemon?), which added a nice bite that was different from the usual garlicky-ness of Caesar dressing. The deviled egg on the plate, however, was superfluous. Finally, we had a pureed soup of sunchoke and fennel with confit fennel and a pomegranate-peppercorn syrup. Everyone at the table loved this soup, and I was scraping the sides of the cup clean with my bread. It was definitely a warm and hearty soup for a cold winter's night - I would have loved more than just a taste. 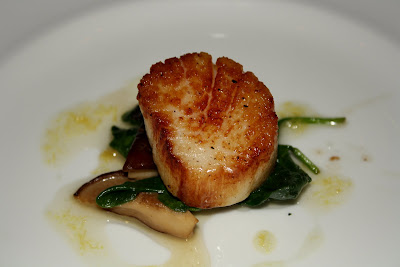 Our entree dishes began with Rigatoni Bolognese, with homemade pasta covered in a thick sauce of beef, veal, and pork. Now THAT'S a bolognese. My favorite of the entrees was up next, a beautifully pan-seared scallop (above) with spinach and shiitake mushrooms, drizzled with a lemon vinaigrette. I love ordering scallops at restaurants because I have such a hard time cooking them - this one was perfect. And the lemon vinaigrette? I could drizzle it on everything and be happy. The final entree was hanger steak with a semolina dumpling and broccoli rabe. The starch was my favorite part of the dish, filled with herbs and pan-fried to have a crispy exterior and creamy interior. 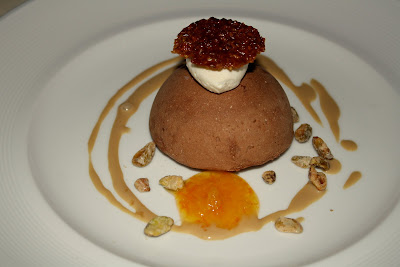 By dessert, we had lost most of our dining companions - the evening was simply stretching out too long. A brave few of us, though, including Where To Eat's publisher Jill Epstein and Fiona from A Boston Food Diary, held strong throughout the dessert course. Our first taste was pound cake with passion fruit panna cotta, coconut crumble, and a butterscotch pudding sauce. The cake was too dense for my taste, but I found the panna cotta tart and fresh - it whisked me away to a tropical place. This was followed by apple crisp - while strange because it feels so out of season, this was one of the best apple crisp's I've had. The topping was actually crisp, while the apples were cooked through and well seasoned. The last dessert, though, was my favorite - a chocolate semifreddo with orange marmalade, coffee anglaise, and candied pistachios (above). Billed as an "Orange Mochaccino," the dish tasted just perfect with all the flavors combined. But then, I do love a good chocolate dessert - it was nice to see something other than a flourless chocolate cake on a menu for once.

I'm not sure where the next four Where To Eat dinners will be held, but if they're anything like this fabulous meal at Lucca, they'll be worth a reservation.