Only on a New England Saint Patrick's Day 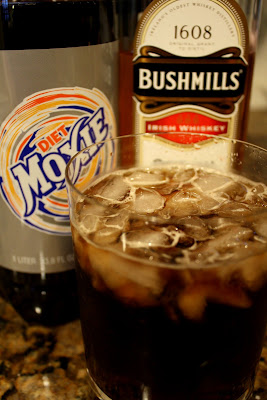 Sometimes things just work out well. Take, for example, last week - I was given the opportunity to meet the master distiller of Bushmills Irish Whiskey AND I was struck by an intense desire for Moxie. Normally, these two things would have nothing to do with each other. But I quickly remembered a drink I had had at Deep Ellum a few years ago - the Black Water - and the stars aligned.

The Black Water, named for the English translation of the Native American word "moxie," is a simple combination of whiskey and the almost-disgusting soda Moxie. I think Deep Ellum uses rye whiskey, whereas Bushmills is a blend of malt and grain whiskey. My palate isn't refined enough to tell the difference, I just drink what I like.

Now, if you didn't grow up in New England, you may never have heard of Moxie (in fact, there's no guarantee you've heard of it if you DID grow up here). Moxie originated, like most sodas, as a tonic meant to have health benefits. It was created in Lowell, MA in 1884 and named after a river near inventor Augustin Thompson's home in Maine. It was thanks to robust advertising that we now use the word moxie to mean that someone has vigor or guts - it didn't exist in the English language before this soda. And Moxie is one of the few sodas that actually taste like the tonic it came from - it's definitely an acquired taste. Imagine cola and root beer combined, only more bitter and less sweet. I can't drink the stuff straight, but I think it's amazing with whiskey.

Onto the Bushmills - I was invited to attend an event with Bushmills' master distiller, Colum Egan, who has been busy promoting the brand before St. Patrick's Day. I brought along a few fellow bloggers, and the evening ended up being Colum walking five women through all the different types of Bushmills (the tasting notes are here). It's amazing how the flavors can change so drastically between different blends of the same alcohol. I especially liked the Black Bush, which is aged in predominantly sherry barrels and has a little bit of a deeper, richer, sweeter taste than the original Bushmills, which is aged mostly in bourbon barrels and is a little lighter.

For a New England St. Patrick's Day, what better thing to do than blend a strictly New England soda with an Irish whiskey? Colum shared a number of Irish toasts with us, but my favorite is one I'll put to good use:

There are tall ships
and long ships
and ships that sail the sea,
but the best ships
are friendships
and may they always be.
Black Water
whiskey (I prefer Bushmills Black Bush, but only had original on hand)
Moxie
maraschino cherries

Fill a cocktail glass with crushed ice. Pour in a three-count of whiskey and top with Moxie. Add a cherry (and a dash of the cherry juice if you like).
Posted by Pam at 3:17 PM

That's pretty much the best way to celebrate St. Paddy's Day ever.