Brownies with more than a touch o' the Irish 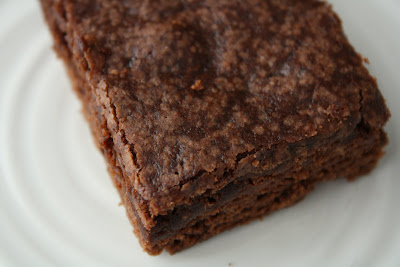 I read a lot of food blogs - probably too many. Often, I find myself skimming through my Google Reader without paying too much attention to details (sometimes even just looking at the pictures). When I'm in that kind of mood, it takes a special recipe to pull me out of my stupor.

And that's exactly what happened when I saw these Irish Cream Brownies on Baking Bites. I wasn't craving brownies until I saw the recipe, but as soon as I did, I HAD to have them. Luckily, I can just say the word brownie to my friend Ann and she's on board. We baked up a batch on Saturday night, to pair with Chipotle burritos, video games, and Caprica. Our group likes to talk, but we were silent as soon as these brownies came out.

I loved them so much, in fact, that I had to make them again a few nights later. We didn't have regular Baileys in the house, but we did have some of the mint Baileys. How awful could that end up, I wondered. How about even better? I'm sure the caramel Baileys would be amazing in these as well.

Man, are these tremendous brownies. Usually when something says it's Irish Cream (or Baileys) flavored, it means it has a hint of Irish Cream. Not these - these taste like the real thing (maybe because it uses the real thing?). Baking Bites included a glaze for the brownies, but I didn't feel it was needed (plus it didn't work for me). All on their own, the brownies form a crisp, thin crust while staying dense and fudge-like inside. I like these so much, they may become my default brownie recipe. What better thing to make for Saint Patrick's Day? My mother was asking for the recipe before she had finished her first bite...

Preheat oven to 350°. Line a 9x9 baking pan with tin foil and grease lightly; set aside.

In a medium bowl, whisk together melted butter, sugar, and cocoa powder. Add egg and vanilla and whisk until combined. Whisk in liqueur until smooth (this will take a minute). Add in baking soda and salt, then whisk to distribute. Add flour and whisk until there are no streaks of flour left. Pour batter into prepared pan and bake for 20-25 minutes, or until a toothpick inserted into the brownies comes out with only a few crumbs, no uncooked batter. Remove using the tin foil and let cool on a wire rack.
Posted by Pam at 10:58 PM

You sold me on these brownies. Officially bookmarked. And, I luv Caprica too!

Let me know how they turn out!

I watched the Caprica miniseries (first two episodes), then felt the need to watch Battlestar Galactica (and loved every minute of it). Caprica is my mother's favorite show now.

These look amazing!!! Definitely on my list! Chocolate + Baileys= perfection in my book!

I still haven't been converted to brownies, but I have a friend who loves them, and Bailey's is just about the only liquor she likes. I think this needs to go on my baking list.

Adele, what is there to be converted about? Your friend will definitely love these :)

haha...I am Jamaican and I have never baked anything without adding a splash of rum.

On a serious note though, I was reading somewhere the other day that coffee is a great addition to every chocolate dish. So maybe Irish coffee brownies would be good?

Coffee is a great addition to chocolate (my favorite chocolate cake recipe uses it as a way to melt the chocolate). I'm not sure how much of the chocolate flavor it would bring out in these, though, since the taste is so very Baileys.