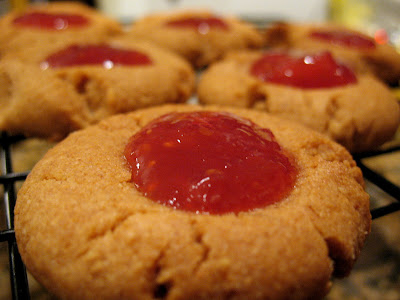 Late in August, Linsey from Cake and Commerce helped put together Boston's Can-o-rama Cantacular, a day filled with learning about all types of canning and general "putting up" of food. I'm sure I wasn't the only one who left eager to put food in jars.

As part of the event, Linsey has started a monthy (or so) canning challenge on her blog. The first challenge was "summer in a bottle," since we were on the tail end of summer produce. I scoped out the farmer's market and decided on white peaches and raspberries for my jam. When I said I didn't need the paper pints for the raspberries, the woman behind me was concerned that they'd all get crushed on the way home. "I'm just going to mush them up to make jam," I told her, and she gave me a look like I was crazy. Crazy like a fox, perhaps...

I have about 8 half-pint and 4 quarter-pint jars of this to keep me in a summery frame of mind throughout the winter. One jar didn't seal correctly in the waterbath, so I stuck it in the fridge. When the urge for more peanut butter cookies struck, I baked my cookies, putting thumbprints in the middle instead of using a fork to push them down, pulled out my jam, and made delicious peanut butter and jelly bites. Yum!

Combine ingredients in a heavy-bottomed pot and mash fruits up. Let stand 30 minutes or so. Bring to a boil, stirring occasionally, and cook for about 40 minutes. As the jam thickens, check the temperature with a candy thermometer - you're aiming for 220°. I'm usually a little impatient with projects like this, so I go with a slightly softer jam (218° or so).

While jam cooks, fill the largest pot you have with water and place some sort of rack on the bottom (I use a lobster pot that comes with a fitted strainer, so I just use that strainer). You don't want the jars to touch the bottom of the pot. Bring to a boil. Place clean glass jars in the water and boil for at least 10 minutes to sterilize. Water should come to an inch or two above the tops of the jars. Prepare lids according to manufacturer's instructions.

Remove jars from water when the jam is done. Fill jars with jam, leaving 1/4 inch headroom on top. Wipe the rims of the jar so they're clean and place on the lids on the jars.

Place the jars back in the boiling water, put the cover on the pot, and process for 10 minutes (start timing when the water returns to a boil if it has become cooler). Carefully remove the jars from the pot and place on a kitchen towel to cool. You will hear the jars seal shut as they cool.
Posted by Pam at 11:23 PM