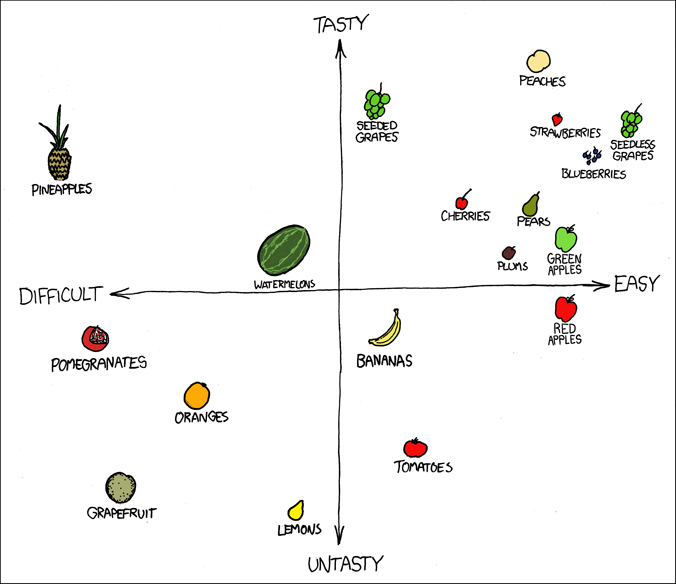 I've admitted before, but I'll say it again: I'm a big nerd. So much, in fact, that I enjoy nerdy media from other disciplines than my own. XKCD is "a webcomic of romance, sarcasm, math, and language," but more often than not, I get lost in the math/programming speak. But a food comic? I'm there.

If you've read anything on this site before, though, you'll know that pomegranates are my favorite fruit, and that I'm not a fan of peaches. Obviously, I have some quibbles with this chart, and I'd move things around if it were my own design. And, although this comic is titled "Fuck Grapefruit," I'm still a big fan. Not saying pomegranates aren't difficult to clean, but they're still tasty.

Where does your favorite fruit fall? Difficult but tasty?
Posted by Pam at 6:55 AM

I love XKCD too! They have some entertaining comics! I have issues with this chart though...a watermelon is more difficult then an orange or grapefruit, plus they should all be above the tasty line...amusing post! thanks!

Hysterical... Love the illustrations! Just think of all the other charts that are dying to be made. I would love to see "Tasty but Stinky," which I would imagine would be full of misc. cheeses, durian, etc.

Also, thanks for the link!

He notes in the original that the coconut is so far in the difficult direction that it's not even on the chart. I would agree with that.

I'd love to see a "Tasty vs. Stinky" version, or "Tasty vs. Messy." There are so many places this could go!

Very ODD... My favorite is Pomegranates! And one of my least favorites is Peaches (whole... I HATE the fuzz). I also like Lychee, Watermelon, Raspberries and Blueberries. I have a strange attraction to Passion Fruit and can live with out Pears... EXCEPT Asian Pears.