From Austin to Boston and Back Again 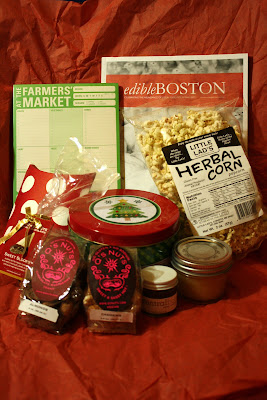 I love getting gifts in the mail. I mean, who doesn't? So when the Boston Food Bloggers and the Austin Food Blogger Alliance teamed up before the holidays for a little cross-city swapping, you know I was in for the ride.

I went to Austin a few years ago for a conference, and while I didn't get to see an awful lot of the city, I loved what I did see. I ate more barbecue than I thought possible at The Salt Lick, spent a fair amount of time browsing in Austin Books & Comics, somehow managed to go to both Cornucopia (for awesome popcorn) and Walton's Fancy and Bakery (for baked goods) about once a day, and bought some crazy things at the City-Wide Garage Sale that now adorn my rooms. I couldn't help but wonder what magical items I would get from Texas.

But first, I had to package up my goodies! I shopped around for some of my absolute favorite local items, like Sweet Sloops from Harbor Sweets, a few different varieties of Q's Nuts, and Little Lad's Herbal Popcorn (the herbs are dill and nutritional yeast). I also added some local honey (which I bought on tap from Follow the Honey), some olive oil from Central Bottle, some chocolate-covered cranberries, and some homemade chocolate peppermint cookies that I had made for the Food Blogger Cookie Swap. Of course, like just about everyone else in the ATXBOS swap, I included a copy of Edible Boston, and I also threw in a farmers' market shopping list pad. I tried to get the package out the door as early as possible because I knew the Christmas season would be so hectic. 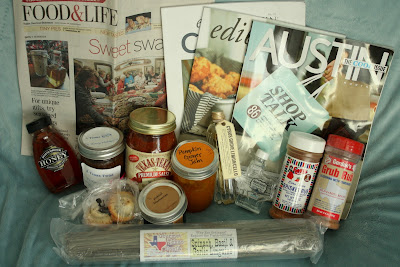 Not long after, I received a box in the mail from my swap partner, Kristina of Girl Gone Grits. It was a good sign, I think, that she had used a tequila box to send everything to me :) Inside, I found a wealth of Austin goodies: two kinds of meat rubs (Fiesta Brand and Gordon's), Texas Texas Salsa (the first kind Kristina tried after moving to Austin), Pie Society Crimps (tasty little bites of pie with nutella), RoundRock Honey, Texas Pasta in spinach and basil (which I'm saving for a really cold night), pickled blueberreis by Confituras (who knew you could pickle blueberries?!), Fig Honey Habanero jam from A Texas Twist, Pumpkin Ginger jam (made by Kristina herself!), a few copies of Edible Austin and a few other Austin periodicals, and (shhhh, don't tell!) a little nip of Republic tequila and homemade (!) limoncello. So many good things in one place! I'm looking forward to having little tastes of Austin to keep me warm throughout the winter.

Great Post! I'm so glad you are enjoying everything. I have to tell you my daughter and I are coveting that honey-It is so delicious, she sparingly spreads it on everything. Oh and those 'sassy" nuts they def have sass! (It was a fun surprise) The sweet sloops were the best! This was so much fun-thanks again for being a great swapper! Happy New Year!

Mmm, I want those pie crimps

This are some very cool gifts from Austin!