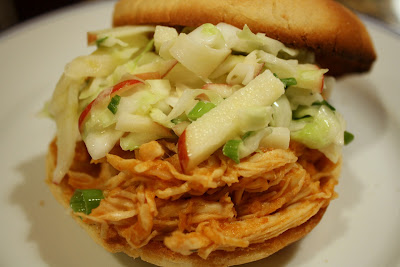 Fall in New England comes on like someone hit a switch. It'll be 80° and humid one day, then 60° and crisp the next. It's how you know the seasons are really changing and not that it's just one particularly cold day. Of course, crisp weather means time for crisp apples (and inevitably, apple cider).

The folks at Kitchen Play clearly agree, what with this month's recipes being sponsored by the U.S. Apple Association and all. I was hoping to be able to go apple picking before I got around to trying some of the recipes, but since that's getting pushed off into October, I stopped by a local farm stand instead. The pulled chicken from Savour Fare especially caught my eye - the recipe looked simple, plus I wanted to lick my screen, looking at her picture.

Whenever I do finally get around to apple picking, though, I'm pretty sure I know what I'll be making for dinner after. This recipe is super quick and definitely delicious, and although it packs plenty of apple flavor, it's still something to look forward to after gorging on apples in the orchard. The chicken is good hot on a toasted bun (the cool slaw gives contrast in texture and temperature), but I enjoyed it just as much the next day, cold out of the fridge with another big dollop of slaw on top. Really, what's not to love?

Melt butter in a large saucepan; add onions and cook until translucent. Add 1/2 cup apple cider, 1/2 cup cider vinegar, ketchup, mustard, brown sugar, cajun seasoning, and salt to taste, and bring to a boil over high heat. Add chicken breasts and enough apple cider to cover. Cover pan, reduce to a simmer, and cook for about 15 minutes or until chicken is cooked through.

While chicken is cooking, whisk together Greek yogurt, 1/4 cup apple cider vinegar, sugar, and salt to taste. In a large bowl, combine apple matchsticks, shredded cabbage, and yogurt mix, and toss to coat. Set aside.

When chicken is cooked through, remove from pan, shred with two forks, and return to sauce. Serve chicken on toasted rolls with a good-sized spoonful of slaw on top.

I love the idea of an apple slaw. This would be a perfect meal for football Sundays!

It really is! It's healthy on top of being hearty, so it'll balance out all the other good stuff :)

This sounds great. I am looking forward to trying it soon. Healthy too!

This sounds so delicious that I had my fingers crossed through the recipe that it was gluten free. It is! (As long as I get GF buns.) Now I have another thing to look forward to when I got apple picking!

As someone who tasted it I have to say it was amazing. And even great the next day! And I normally hate slaw. It was really great I'll definitely be adding it to my weekday recipe list!

Ann, you know my hatred of slaw. And you saw how much of it I ate! (ie all of it)

These sandwiches sound fantastic Pam! Messy but oh so worth the trouble.