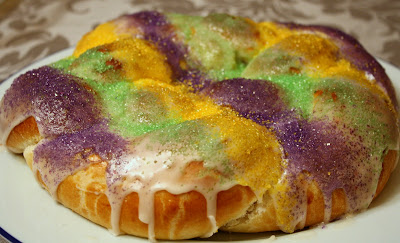 I have never been to New Orleans, nor have I ever had a real king cake, but that didn't stop me from making one when asked. My friend Ann, who has lived in New Orleans, was the one asking, and since I was using her flour and butter, I was happy to oblige.

cookbook before Christmas like everyone else in Boston, but I didn't get a chance to make anything from it until well into the new year. For some reason, I decided to skip any of the easier recipes and jumped right to brioche. The recipe came together with no problems and couldn't have been easier to follow. However, the recipe makes enough dough for two loaves, so half went to make a regular loaf and the other half went to the king cake.

Ann started listing things that would be tasty - I don't think this is actually based on a cake that she has eaten. She wanted chocolate and orange and, of course, something to use as the baby (the small token that brings good luck to whoever gets the piece with it). I ended up dividing the dough into three parts, rolling them into logs, adding a filling, then braiding them together. Ann tells me it was just like king cakes she had in New Orleans (only better, I would assume, because it had both chocolate and orange in it), so I'll just have to take her word for it.

I'm not going to give you the recipe for the brioche, since I used the one out of the Flour cookbook, so feel free to use your favorite brioche recipe. My recipe starts after the dough has had its first rise, but before it has been shaped and given its second rise. Seriously, though, check out Flour

- it leaves me wanting to lick the pages every time I look at it.

Combine orange zest and white sugar in a bowl and set aside.

Divide dough into three equal parts and roll each into a long rope. Flatten the ropes - lay chocolate down the middle of one, orange sugar down the middle of another, and the nut somewhere in the third. Pinch sides together to seal the fillings in, then reroll if needed back into a rope shape. Braid the three ropes together, then bring the ends together to form a circle. Pinch the ends together to form a seamless circle. Place the loaf on a parchment-lined baking sheet, cover with plastic wrap, then let rise in a warm spot for 3-4 hours, until it has doubled in size.

Whisk together the powdered sugar, vanilla, and a splash of milk until smooth. Add a little bit of milk at a time until the glaze is just slightly runny (you don't want it too watery, so go slow!). Drizzle over the king cake, then sprinkle on colored sugars.
Posted by Pam at 9:35 AM

Oh wow, this looks amazing! I received "Flour" for Xmas this year and am still a little worried about trying the brioche recipe, but your post is making the attempt more and more likely. :-)

I love the pretty colors on the King Cake!