The problem with blogging, as with so many other things, is that the longer you're away from it, the harder it is to get back into it. For literally six weeks, I've come to my computer almost daily with the intent to blog, but every day that passed and it didn't happen, the less likely I was to actually do it. Well, here I am, having had to create a post for a special assignment (you'll read all about it on December 1st), which managed to get me back into the blogging mindset (hopefully).

That doesn't mean that I haven't cooked anything in six weeks. Quite the opposite, in fact, and I kept taking pictures and jotting down recipes with the hope that it would kick-start some writing. In fact, one week I roasted a pumpkin (ok, a buttercup squash, which has more flavor than a sugar pumpkin) and used it in just about everything I made.

That was how I stumbled across the wonder that is kolokithopita. I was searching for pumpkin recipes and came across montcarte's recipe from last fall. Most importantly, it was a savory use of pumpkin puree, which is much less common than sweet uses. Less importantly, but still intriguing to me, it involved feta cheese (really, any cheese would make me happy) and phyllo dough (which always produces impressive results).

I ended up making this twice in one week because it was so good. The first time, I could barely hold myself back from cutting into it - I wanted to wait until dinner, but instead I declared it an appetizer (hours early?) and just dug in. I'm glad I didn't wait - the crispy exterior and the creamy interior, the natural sweetness of the pumpkin and the salty goodness of the cheese made this a pretty perfect pumpkin dish. At the end of the week, I was invited to a housewarming party and thought it would make a good side dish. The kolokithopita travels well and is good warm, room-temperature, or cold out of the fridge. Plus, it's fun to say.

Don't let the use of phyllo dough scare you off. I know a lot of people are a bit frightened of using it, as it is known to be a somewhat cantankerous dough. This is a good recipe to learn on, though, since it's got to be roll and twisted. The dough WILL rip in this recipe, but it's not a problem since the focus isn't on laying it perfectly flat (like it is in recipes like baklava). Plus, this recipe uses very little phyllo (less than half a box), so if you screw up a lot, you still have more than enough to get the job done. 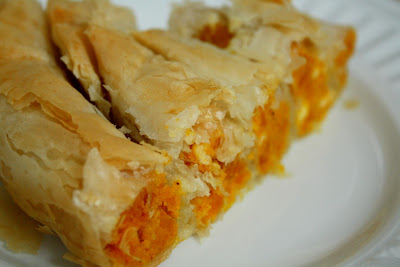 Preheat oven to 350°. Brush an 8-inch round cake pan with butter and set aside.

Lay one sheet of phyllo dough on work surface and brush with melted butter. Lay a second sheet of dough directly on top of first sheet and brush with more butter. Lay filling in a thin strip along one of the long sides (but don't go all the way to the edge or the filling will squeeze out). Gently roll the dough away from you, forming a long snake. Arrange the snake inside the baking pan, curving it to fit the curve of the pan. Brush the exterior of the snake with more butter. Repeat with remaining dough and filling until the pan is filled (make sure to brush each curve of the dough with butter as you add it to the pan - the butter is what makes it flaky). Bake for 45 minutes or until the top is golden brown.
Posted by Pam at 4:35 PM

Congrats! This post is featured in this week's "Recipes of the Week" round-up on BostonFoodBloggers.com: http://www.bostonfoodbloggers.com/2010/11/recipes-of-week_17.html

I've been out of blogger and Twitter world for a week battling a nasty flu and I'm slowly getting back into it. I'm glad to see you back on the blog and look forward to reading your posts!

intriguing. so i improvised using spaghetti squash and approximately what you suggested, minus the honey, in my springform pan which is slightly bigger than yours. the results are staggeringly delicious! thanks!

yours is so nicely browned and the rolls are better shaped - did you double the layer in a couple of places?

there's an amazing elusive sourness, almost lemony - from the combination? my favorite is always using novel (for me) ingredients (phyllo and nutmeg)!