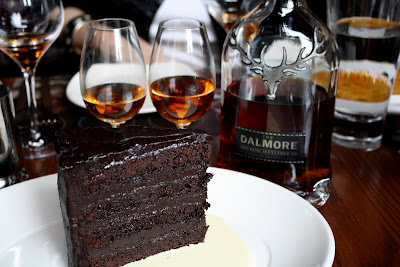 Over the past couple of years, I’ve had the chance to meet a lot of people though this blog that I otherwise would have never met. I’ve met other great bloggers, restaurant chefs, farmers, and even a master blender or distiller or two. Somehow, somewhere, someone decided that I knew enough about whiskeys to start meeting the people who make them, and I’ve been more than happy to oblige. (Granted, I probably knew more about whiskeys than most girls my age, but I’m far from an expert.)

From going to just a few of the events, it’s easy to see how much a whiskey is like the man who makes it. Back in March, I had the chance to sit down with the master distiller from Bushmill’s Irish Whiskey, Colum Egan, and as he walked us through the different marques of the brand, I could see how his personality and the personality of the alcohol were in sync – warm and inviting, calming and comforting. And from the moment I was invited to taste Dalmore Whisky with its master blender, Richard Paterson, I knew this specific drink was going to be entirely different.

Dalmore is a Scotch Whisky (hence no ‘e’ in whisky) made in the Highland region of Scotland. It doesn’t have that smoky, peaty flavor that most people associate with Scotch. Richard Paterson is a third-generation master blender, and he’s been at the craft since he was a child. And similar to the whisky he blends, Richard is lively and talkative and yet all about tradition. Of course, I sat right next to Richard during lunch, and we talked about a wide range of things (drinking obviously, cooking, Boston, Scotland, even archaeology and the place that history and tradition have in our lives), but I think everyone at the table got the feeling that he was gregarious.


Richard has given a number of interviews about Dalmore, and it would be more interesting for you to hear it from him than from me. Watch the video above to get a feeling for both the whisky and for the man himself. He also has a great blog, The Master Blender, where he talks about all kinds of great whisky stuff - right now, he's looking at the case of whisky recently found at Shackleton's South Pole camp.

We tried five different marques, or varieties, of Dalmore. There are also special blends that they make in limited quantities, but these five are fairly widely available. Whisky gets its unique flavor from the kind of cask it’s aged in and the amount of time it spends in that cask. It’s amazing how much the flavor can change from this, and Richard says that flavor can change from cask to cask of the same batch, sometimes dramatically, which is where his job in blending the whiskys together comes into play.

I especially enjoyed the chance to taste all of these side-by-side – by being able to go back and forth between the different glasses, I had an easier time picking out the flavor differences than I would if I just tried one and then the other. 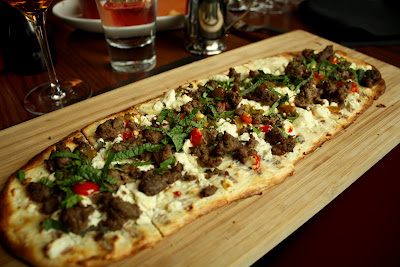 The tasting was held at Post 390, and I would be remiss if I didn’t talk about the food too. After tasting all five whiskys, we shared fried clams (surprisingly delicate) and a creamy crab and spinach dip. It was hard to choose a main dish, but every time I looked at the menu, the lamb sausage flatbread jumped out at me. I’m so glad I ordered it, because it was tremendous – crispy dough topped with perfectly cooked ground lamb, feta, just a touch of spicy peppers, and plenty of chopped mint. I would go back to Post 390 for this dish in a heartbeat. We ended the meal with a dense chocolate cake and a light cream brulee, both ordered specifically because of how well they pair up with the whisky. Chocolate cake + whisky = amazing!

Full Disclosure note: The Dalmore tasting and lunch at Post 390 were given to me free-of-charge.
Posted by Pam at 10:31 AM

Ummm seriously- that cake in your first photo looks AMAZING! You constantly impress me with your photographs!

Wow, this sounds fantastic! I definitely do not know enough about whiskey to be invited to this kind of event but one of my goals is to learn and appreciate more about scotch this year!

Ha! Thanks Fiona - the cake tasted even better than it looked!

Try tasting a few scotches next to each other - I find that I can only really appreciate them when I can pay attention to the differences between them.

I have a recipe for a chocolate whiskey cake bookmarked, but I've put off making it because the die-hard chocoholics in my life also happen to be non-drinkers. This post is making me think that I should just go ahead and bake it.