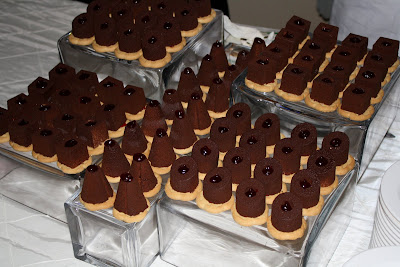 As I mentioned last year, I am a Girl Scout. Like, still a Girl Scout. Like, a lifetime member of Girl Scouts. So when Girl Scout cookie time rolls around, I'm always excited to buy a box or twelve. (It helps that my niece is now a scout and gave me a box of Thin Mints for Christmas - like a drug pusher, she is. First taste is free...)

Girl Scouts of Eastern Massachusetts has, for a few years now, put together an event called Girl Scout Cookie Creations. They ask local chefs to create recipes using Girl Scout cookies, and then they throw a big bash where people consume inordinate amounts of sugar. This year, they split the event into two nights - one in Salem and one in Boston. I only attended the Boston event, but from looking at the recipes, the night in Salem sounded just as delicious.

My friend Melody, who went through all 12 years of Girl Scouts with me, and I arrived right at the beginning of the event and quickly got to tasting. Our first bite was the Peanut Butter Terrines (featuring Peanut Butter Sandwiches and Shortbread) from Turner Fisheries (above). And from the first bite, it was clear that this was the dessert to beat. With the Shortbread as a base and the peanut butter puree on top, this was a perfect little treat. The puree was just sweet enough, and I loved the textural difference between the puree and the shortbread base.

Next up were Kickass Cupcakes' Caramel Delites Cupcakes. They were, like all of Kickass' cupcakes that I've tried, fine - a little dry and with waaay too much frosting. They used crushed Caramel Delites as a filling to the cupcakes, which added a nice crunch to the cake.

I was already feeling like I'd had too much sugar, and we were only 2 tables in! Some water cured me, though, and we proceeded to the Au Bon Pain table. Frankly, I wasn't expecting much of anything from the bakery chain, but their granola bars were fantastic. I tried the Caramel Delites bars, which were hearty, filled with granola, almonds, coconut, honey, and cookie chunks. I would most certainly buy this at an Au Bon Pain, and I might even make these at home. I didn't try the Peanut Butter Chocolate Banana bars (featuring Peanut Butter Patties) because I don't think bananas have a place in dessert, but Melody didn't like it as much as the Caramel Delites bar.

While enjoying our granola bars, we both thought we smelled something savory, like chicken wings. We took a swing by the cheese table in the front of the room, but there was nothing that looked like it would be giving off such tempting aromas. So we headed back to try the next sample, and lo and behold, Locke-Ober had ribs! Served with grits and sprinkled with crushed Shortbread, the ribs were delicious, but a bit of a cop-out. The cookies had almost nothing to do with the dish, making them an odd choice for a cookie-inspired event.

Ready for more sugar, we headed on to Aura's table, where they were offering something called the Layered Lemon Ice Box. The layered dessert was served in a push-pop, which made it all that more fun to eat. It consisted of layers of lemon curd, pureed blueberries, whipped ricotta, and crushed Lemonades cookies. The push-pops were fun, but they made it difficult to taste the layers together - instead, I really only tasted one at a time as I pushed the bottom up. Definitely tasty, though, and this has me wanting to make some citrus curd sometime soon.

Aquitaine was up next, and although I don't like bananas, I bravely tried their Boston Banana Cream Torte, featuring Peanut Butter Sandwiches and Daily Go Rounds. I can't say much beyond that it was good despite the bananas, and if this is your kind of thing, it looks very simple to make at home. But I do normally enjoy Aquitaine's desserts, so this is really just a personal preference thing.

Finally, we visited Tremont 647 for some Peanut Butter Cheesecake with Butterscotch Sauce, featuring Peanut Butter Sandwich cookies. After the first bite, I had a problem on my hands. Turner Fisheries had been on the top of my list the entire evening, and then suddenly, with a different take on peanut butter, Tremont 647 was turning everything on its head. I enjoyed the cheesecake, but the butterscotch sauce really tied the whole dish together.

Melody and I needed another break from the sweet, so we enjoyed some cheese and discussed whom to vote for. It seemed clear that we would vote for either Turner Fisheries or Tremont 647, and in the end, we went with Turner Fisheries because their dessert was something completely different. While Tremont 647's cheesecake was very tasty, it was cheesecake, which can take on any number of flavors, whereas the cookie puree in the Turner dish was something out of the ordinary.

And it looks like we picked a winner. Turner Fisheries got the crowd votes, and Aura won the judges over with their lemon curd push-pops. I was surprised that none of the chefs went for Thin Mints, the most popular of the cookies, but after stating that one of the mint offerings last year tasted like toothpaste, maybe I'm not so surprised. Is it sad that I'm already looking forward to next year?

And don't forget to buy Girl Scout cookies! If your local scout doesn't knock on your door, you can search for booth sales here. Girl Scouts of Eastern Massachusetts also collect boxes of cookies for soldiers overseas, so buy an extra box to send to a soldier.
Posted by Pam at 5:28 PM

It was great to see you! By the way, my favorite was actually the Lemon Ice-Box pops. They were awesome and perfect for the event! I probably shouldn't say this about a charity event but some of the other stuff was impossible to eat standing up (why were there only like 8 tables in the whole room?) and a lot of it was just plain bad. I was pretty disappointed actually with most of the desserts. I think I'd rather just eat a sleeve of straight-up Thin Mint cookies next time.

I agree, a lot of the dishes were hard to eat, but I feel like that's pretty typical of these kinds of events. And really, Girl Scout cookies are so awesome, there is no reason to do anything with them other than eat them straight up ;)

This looks fantastic! My husband just brought home three boxes of Girl Scout cookies yesterday and I am PUMPED to eat them. The peanut butter ones are my favs.