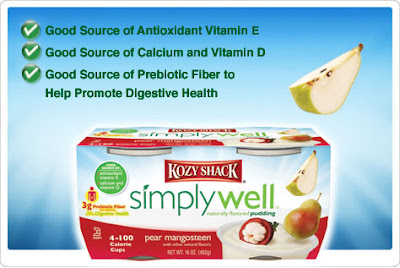 I was walking through the supermarket the other day and came to a screeching halt next to the pudding section. Kozy Shack's new Simply Well line has colorful packaging and, more importantly, flavors that make it stand out from the crowd on the shelf. The words "pear" and "mangosteen" jumped out at me - these are not things that usually describe pudding - and a package made its way into my basket in a split-second.

And after popping a cup open, it became clear to me that this pudding was more than pretty packaging. Both the pear and the mangosteen flavors are clear and distinct, and yet they work together in harmony to create one hell of a pudding. It's light and refreshing and yet filling. The texture in the package is a little thick (hence no picture), thanks to tapioca starch and added fiber, but the mouthfeel is just right.

I found my pear mangosteen pudding at my local Market Basket (which is quickly becoming a great place to shop for speciality items), but you could ask for it at any store that already carries Kozy Shack puddings.
Posted by Pam at 7:29 AM

Ooh that does sound quite delicious. And I totally miss Market Basket!! Might have to make a stop there when I'm visiting my parents for Thanksgiving!