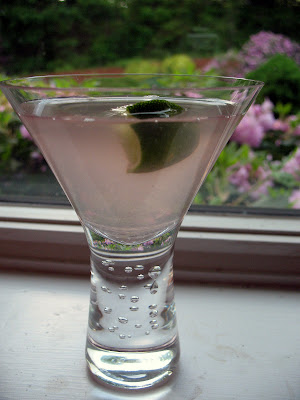 With plans for a Girls Night In last Friday, hosted by someone who has been talking for weeks about how much she loves rhubarb, my mind starting turning. A quick search for rhubarb in Tastespotting won me this recipe for rhubarb cosmopolitans, which I tweaked once I started mixing. These drinks had an unusual and slightly different taste - I don't think I could have placed the flavor as rhubarb if I hadn't made the syrup myself, but everyone enjoyed the taste.

The syrup is easy to make and even easier to drink. Don't throw out the strained rhubarb - eat it with a spoon, or on toast, or over ice cream...

Combine rhubarb, sugar, and water in a medium pot. Bring to a boil, then reduce to a simmer and let cook for 15 minutes, stirring occasionally. The syrup will become bright pink and the rhubarb will break down. Strain through a fine strainer and let cool before using.

Combine syrup and vodka in a shaker with ice and shake until cold. Strain into a martini glass, squeeze in the lime wedge, and top with a splash of lemon-lime soda.
Posted by Pam at 4:09 PM

This is such a unique idea for a Spring cocktail. Of course I also love it because it's pink!

This was insanely yummy and dangerous because you can't really taste the vodka!